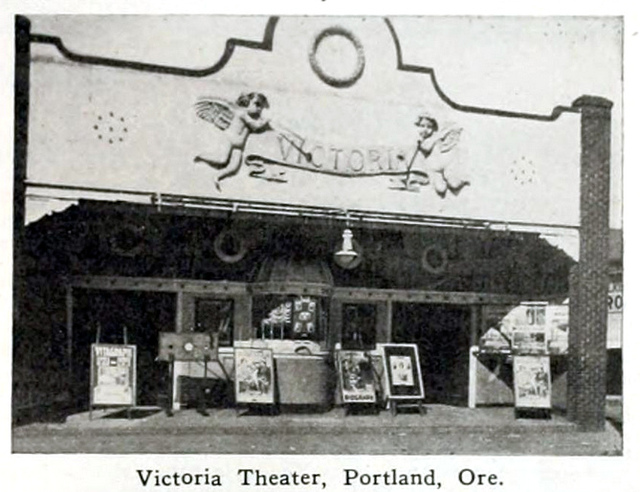 The Victoria Theater opened in 1911 with 400 seats. In 1924 it was enlarged and renamed renamed Alberta Theater. It was closed in 1965 and converted into a church. In 2009 it was converted into retail and office space.

If the “HGHLAND TEMPLE” was the same building as the Alberta Theater. It looks like (if you go up the street on the right) they tore the building down….sad.

Here is a photo of the Highland Temple mentioned by ChrisAckerman.

I don’t think it was demolished. I think it was gutted and remodeled. If you look at google street view, you can see what was done. The back of the theater was on 18th avenue.

There is a distant glimpse of the Alberta Theatre’s marquee in the photo on this web page. A comment by “Butch” some way down the page says that the theater was this side of the big vertical sign reading “Furniture” which can be seen on the left side of the street (click photo to enlarge.) The theater name in script on the end of the marquee can be made out, though it is partly blocked by a utility pole. A dark vertical sign above it can’t be read, but might also belong to the theater.

This web page has an article about Alberta Central, the office-retail project which incorporates the old Alberta Theatre auditorium. There is a photo of the auditorium during reconstruction, after it was gutted but before the sloped floor had been leveled. A second floor housing offices has been inserted into the space.

The smaller building which housed the theater entrance has been demolished and replaced by the two-story building housing a branch of Umpqua Bank. It’s possible that the demolished building was the original Victoria Theatre, reported in 1916 to have 400 seats. The larger auditorium backing up to 18th Street must have been an expansion, possibly dating from 1924 when the Wurlitzer organ was installed.

The Alberta Central article also notes that the Alberta operated as a movie theater until 1965, at which time it was converted into a church. The church remained in the building until perhaps as late as 2007. The conversion to Alberta Center took place in 2009, the year the article was published.