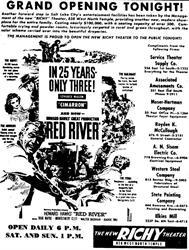 The New Richy Theatre opened April 21, 1950. It was closed August 1986. The building has since been demolished. In its later years the Richy Theatre played Spanish language movies. The site of the theatre is now a Pizza Hut.

This article was in the Salt Lake Tribune in December 1974:
http://tinyurl.com/qnlnv4

During the Early Sixties it went by the name,New Richy.“JOURNEY” was playing there Oct.2 1959.

Opened as the New Ritchy Theatre with 500 seats on April 21, 1950 by Alvie Peterson at 838 W. North Temple. Its first film was “Red River.” Bathed in green and coral, the $95,000 theater had crying rooms for the youngsters. Beginning in 1959, the Richy Theatre switched to Spanish language films on Sundays and extended that to twice weekly. Under new ownership in 1963, the foreign language options expanded with regular Japanese films in the mix. Regular German offerings and many others continued. The snack bar expanded to have more international treats, as well. The theatre appears to have ceased operations in August of 1986.