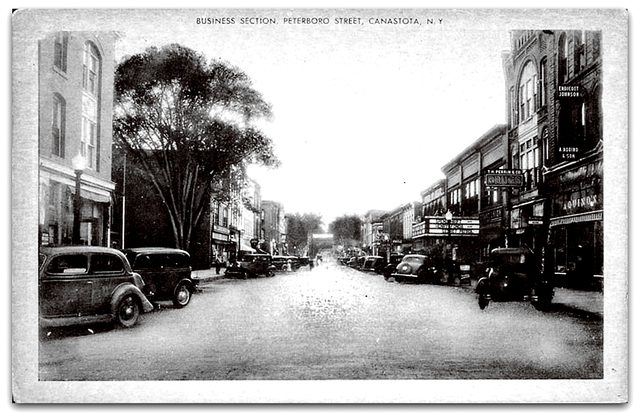 Originally opened as the Sherwood Theater around 1914, by 1941, it had been renamed Avon Theater.

The Avon Theater closed around 1981.

Lost: The May 13 photo shows a marquee in need of repair, but it has what looks like a Vitrolite facade and half moon doors which would be original.

I don’t know either, but I do know via a recent email the demise of another NYS theatre that has been razed in Canisteo NY.

Don’t think it’s there anymore, what do you think?

Works for me in 2 different browsers. Safari and Firefox…

You can recognize the brick building with four 2nd story windows to the right of the theatre in both the old photo and the current map. Where the theatre was you can now see a gray building which is two stories tall in front, but angles down to only one story tall in back. It’s obvious that the theatre is gone and replaced by this smaller building.

From the 1940s a postcard image view of Peterboro Street along with the Avon Theater.

I believe the Sherwood was original opened around 1914, and was owned by a gentleman by the name of Ralph Balducci, who leased it to Herman Rakov. Rakov owned a number of theaters in the Central New York area. A 1921 New York Supreme Court case shows that Rakov was given the boot for not living up to conditions stated in his lease (and judging from a number of other lawsuits against him, did the same everywhere), and in January 1921, the theater was leased to Mike Kallet.