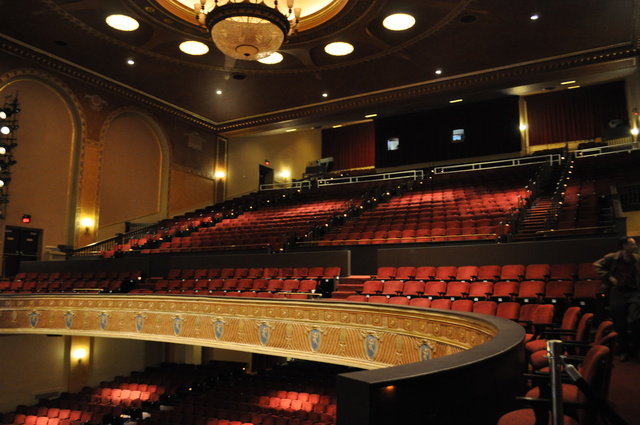 Designed by Thomas Lamb and accommodating more than 2,000 patrons, this Walter Reade-operated theatre opened in December 21, 1921 with a presentation of the 64-minute silent, “White Oak” starring William S. Hart, as well as an orchestral performance, a nature film, a newsreel, and five vaudeville acts. After a few years of operation, the theatre was transferred to Keith-Albee and continued to operate as part of the RKO chain into the 1960’s. Eventually, due to declining attendance, it was closed in October 1972. It was sold and reopened as a 2-screen adult film venue from December 7, 1973, finally closing in 1979.

After being acquired by the New Brunswick Development Corporation and later the New Brunswick Cultural Center and remaining dark for nine years, the theatre received a $3 million dollar restoration. It reopened as a multi-purpose entertainment venue with a performance by the Jerusalem Symphony Orchestra on April 24, 1988. It has since served as a centerpiece of the revitalization of downtown New Brunswick.

In addition to occasionally exhibiting classic films such as “City Lights”, the theatre has in recent years hosted performances by Ellen DeGeneres, Kenny Rogers, the Chieftains, Ray Charles, Bill Maher, Fiona Apple, Ladysmith Black Mambazo, George Carlin, the Russian National Ballet, Harry Connick Jr., Morrissey, Bill Cosby, the Royal Philharmonic Orchestra, and B.B. King, among many, many others. The theatre has been a participating venue in both the Black Maria and New Jersey International Film Festivals. Perhaps most importantly to any NJ native, the theatre featured an acoustic performance by Bruce Springsteen to coincide with the November 21, 1995 release of his album, “The Ghost of Tom Joad”.

The theatre generates approximately $4 million dollars in annual ticket sales with attendance of between 275,000 and 300,000. It features two seating levels and currently houses 1,833 seats. There is a 46 foot wide movie screen for when movies are shown.

With a $500,000 grant, the theatre’s façade was restored and a new marquee installed in 1998. More recently, the theatre was awarded a $3 million dollar grant from Middlesex County’s Open Space Farmland Preservation and Historic Preservation Trust Fund. A major renovation promising restoration of the interior to its original decor (as opposed to its current Art Deco style, the result of a 1930 renovation) took place in the summer of 2004. A Grand Reopening Gala, emceed by Jay Leno, was on October 3, 2004.

This is an older rendering:

RKO closed the State in New Brunswick, and the Lincoln and Trent in downtown Trenton, in October, 1972.

This is part of a 1954 personal injury claim:

The defendant, Trenton-New Brunswick Theatres Company, owns and operates a moving picture theater at 17 Livingston Avenue, New Brunswick, N.J. Immediately adjoining the public sidewalk is an outer vestibule about 12 feet in length covered with rubber matting. At the end of this vestibule there are six transparent glass doors through which entrance is made to the inner lobby. The dimensions of this interior lobby are not given but the picture introduced in evidence shows it to be a quite sizeable one. It is carpeted from wall to wall. The walls are tiled and judging from the picture contain some posters relating to current or future pictures. On he right side for one entering, a glass windowed box office is located. At the end of this lobby are six solid doors which lead into a portion of the theater where the seats are located and the picture is shown.

The plaintiff, Mrs. Ruth A. Barnard, who was 76 years of age at the time of the accident, January 14, 1953, resided at 116 Livingston Avenue, apparently a short distance from the theater. She had been attending moving picture performances there for many years and had been in the lobby “many, many times.” She preferred the afternoon performances over those of the evening. The afternoon shows did not start at the same time; she said that they begin irregularly at 11:55 A.M., 12:00, and sometimes 12:15 P.M.

On January 14, 1953, at about 11:15 or 11:30 A.M., she entered the main or interior lobby through one of the glass doors for the purpose of inquiring as to the time the matinee began that day. Before entering she saw three men in the interior lobby near the solid doors already described, and she thought they might be able to give her the desired information. She knew that the picture was not on at that time.

She walked through the glass door which was open, up to the three men and made the inquiry she had in mind. One of the men answered, saying they were just workmen and were unable to tell her. At this, she turned to her right to leave and her left foot struck a five foot ladder which was lying on the lobby floor and which she had not seen. As a result she fell and suffered the injuries for which the suit was brought. She did not remember whether there were lights on, but it was a bright, sunny day and there was sufficient light from the outside to enable her to see where she was going.

The trial court dismissed the action on the ground that no negligence had been shown on the part of any of the defendants. Plaintiff now appeals.

Lots of activity here, including Ringo Starr on October 25th and Wendy Williams on December 12th…

remember seeing midnite rocky horror then while in high school circa 1980…plenty of cold beer and smoke…anyway, some seriously impaired dude tried to hop a picket fence down the block from the theater and didn’t quite succeed..though nothing was prodruding he was yelling “Get the fn picket out of my leg!” over and over…fun times.

Now reopened after renovations during the Covid shutdown. More info at this link: https://www.mycentraljersey.com/story/entertainment/theater/2021/10/08/state-theatre-new-jersey-opens-100th-season-2021-2022/6030084001/?fbclid=IwAR3nZkp8-nRQvXr21hG5xKXnnf9WWVE1-ixFeVYkr1BJQALeSb-UhlzeMP0