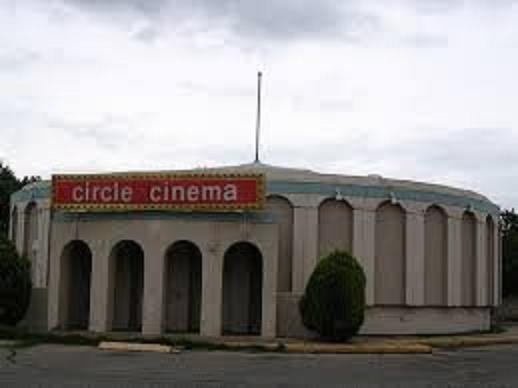 Opened in 1969 as a sports themed restaurant which closed after 6-months and became a live performance venue named Sound Sircus, which closed in 1975.

On January 21, 1976 it opened as an adult movie theatre named Circle Cinema with Andrea True in “The Seduction of Lynn Carter” & Bambie Allen in “Affair in the Air”. Despite both movies being X-Rated (and legal to be screened), the cinema, which was open 24 hours a day, was raided and closed down. By the late-1980’s it was screening gay adult movies and was a successful business. It was ‘temporary closed’ on March 16, 2020 due to the Covid-19 pandemic. In 2022 it is open selling adult toys and sex products, still named Circle Cinema.

This and other Wichita adult theatrea were subject to a number of raids in mid performance and the films confiscated. In some cases the names of the patrons were taken.

The circular stadium-shaped adult cinema and retail shop began as what was going to be a chain of sports-themed restaurants called Big Leaguer(s). Opening in 1969 and inspired by the Astrodome, the “mini-stadium” venue booked special guest Rocky Marciano to stoke business. The concept fizzled quickly fading within about six months. The venue was then converted to a live events concept known as The Sound Sircus with live concerts. That business had stops and starts losing its liquor license and for not serving minority patrons closing in 1975.

In 2005, the City tried to zone the business into obsolescence without success and instead constantly harassed the cinema’s patrons with vice busts trying to close the business in that manner. Give the plucky Circle folks credit for not caving even if the entertainment was not in line with most of the public’s sensibilities. The venue’s theatrical exhibition was temporarily closed on March 16, 2020 due to COVID-19 and did not look to be making a comeback. The main business emphasis was on adult toys and CBD products but it was still conducting business / operational as the Circle Cinema.