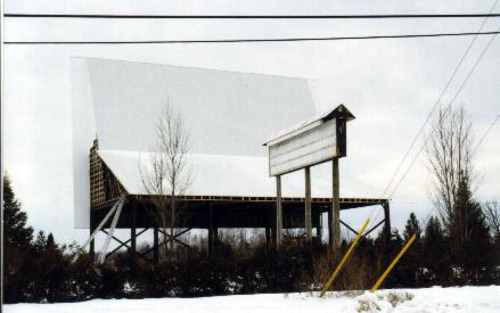 The Drive-In originally opened in 1954. The Skylight Drive-In reopened in 1999 after an ice storm blew down the screen. The drive-in is open on a seasonal basis. Capacity is about 200 cars.

The adress on this drive-in does map properly.

The drive-in’s news page says it was opened in 1954, purchased by husband and wife Kevin Marshall and Kathy Lepine in 2014, and nothing in between. What do my Motion Picture Almanacs say?

Hmm! The MPAs aren’t perfect, but that would be a very long time to not notice a name change, plus there’s that discrepancy in capacity numbers.

Also, a January 2008 retrospective ramble in the Daily Observer included, “Pembroke’s first Drive-In Theatre afforded you the luxury of enjoying movies right in the comfort of the family car with a speaker slung from the window. … Residents of this area are now rediscovering this unique, outdoor movie adventure every summer at Matt McLaughlin’s Starlight Drive-In.” A 2016 Daily Observer article said the drive-in was built in 1954 on land “severed off farmland owned by the McLaughlin family,” and that Matt was the guy who sold it to the current owners.