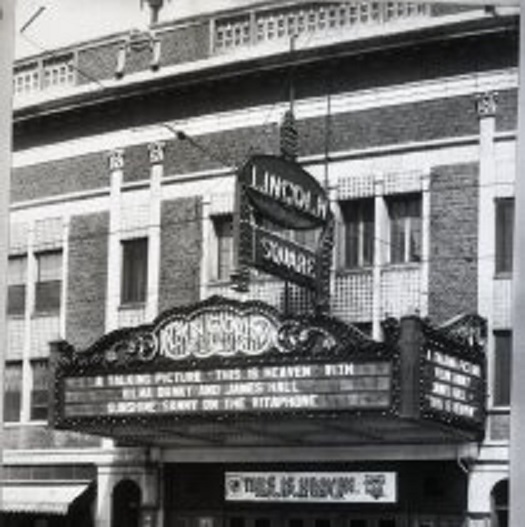 The Lincoln Square Theatre, designed by Fred F. Swirsky opened with the anti-German feature “To Hell With the Kaiser” on September 2, 1918. In 1936, the “Square” portion of its name was dropped, and it was remodeled by Charles N. Agree in Art Deco style.

The Lincoln Square Theatre was part of a large multi-use project. A 1922 biographical sketch of Harold M. Smilansky, an officer of the Lincoln Square Building Company, described the block-square project as being

“…of steel and brick construction, with stone and tile trimmings, one section three stories and the other six stories in height. The main building contains fourteen stores fronting on Fort street; one hundred and ten five-room apartments; four suites of offices for physicians and dentists; a large dancing school; the largest one-floor theatre in Detroit, seating two thousand persons, and a six-story warehouse of solid brick and steel construction which contains thirty thousand square feet of floor space.”

The web site Buildings of Detroit names Fred F. Swirsky as the architect of both the Lincoln Square Theatre and a Detroit house called the Medbury Theatre, which was located at 5848 Hastings Street.

I would love to have more information on this, pictures would be great, I grew up living in an apartment facing fort street back in 1966. I cant seem to find any other information regarding this building, I remember it being a beutiful building, please contact me back if anyone can find more information. Thank you, Glinda

please contact me if anyone has any other information.

Glinda: I’ve never been able to find any photos of the building or of the theater. I’d like to see some myself. The article from which I quoted in my earlier comment is in this book at Google Books. The brief biographies of both Louis Smilansky and Harold Smilansky both mention the Lincoln Square project, but the biography of Harold is the one with the description from which I quoted.

Thank you, Joe: I cant understand why there isnt any pictures, I remember black rod iron gates that were at the entrances of the court yard and the theater was decorated beutiful, there was a doctors office, my mother work for (Dr. Menye) not sure if that is the right spelling, Dentist office was right next door and the court yard was a site to see in its day. If you find anything else in the future, please contact me back. I am going to continue to look for more information and will post if I happen to find anything else. It is nice to see the architect of the old detroit buildings from the past.

Maybe if I look for (Lincoln Square Building Company) it will have some archeives of past building projects they did.

I wonder if the Cadillac Realty company has anything listed about the Lincoln Square apartment building.

In 1936, the “Square” portion of its name was dropped, and it was remodeled by Charles N. Agree in Art Deco style. Maybe using this information we can find more about it, maybe pictures. I am going to keep researching using different avenues.