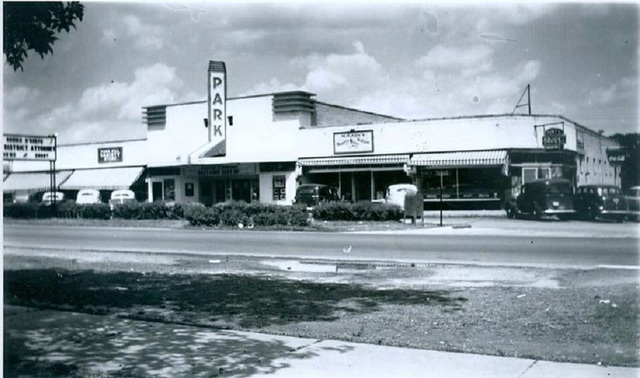 The Park Hill Theatre opened for the Malco chain on March 30, 1941, with a seating capacity for 650, all on a single sloping floor. The address given in the 1950 edition of Film Daily Yearbook is ‘406 Ark.-Mo Highway, Park Hill, North Little Rock’. The road today has been re-named John F. Kennedy Boulevard.

Ken, as usual your guesses are spot on: Park Hill Theatre in the “Historic Park Hill” neighborhood and JFK Blvd. It’s hard to tell by what is there today whether it was razed or renovated into a separate piece of a small strip mall. Whatever happened was done in the early 2000s.

Boxoffice Magazine of January 25, 1941, said that Malco had announced a tentative opening date of March 1 for their new Park Hill Theatre. It was Malco’s third house in North Little Rock.

This web page has a photo of the nondescript strip mall which had replaced the historic theater by 2004.

The house on Akansas-Missouri Highway was definitely the Park Hill Theatre, and opened in 1940. The theater was located in what is now the 3400 block of Kennedy Boulevard according to a document about the Park Hill district from the Arkansas Historic Preservation Program (PDF here.) This is what the document says about the theater:

“The Park Hill Theater and Community Center in the 3400 block of John F. Kennedy Blvd. (formerly the Arkansas Missouri Highway) was constructed in 1939-1940 and was another design by architects Brueggeman, Swaim and Allen. The complex, often referred to as North Little Rock’s first multiple-store complex, originally housed a drug store, grocery, post office and movie theater. Edward F. Brueggeman headed this local architectural firm, which was responsible for the design of some of the most notable buildings in Park Hill. The firm was best known for its designs for Malco theater buildings nationwide in the 1930s.”

The October 24, 1940, issue of The Film Daily had this announcement about the Park Hill Theatre:

“North Little Rock, Ark.— Malco’s new community theater, which will be constructed at Arkansas-Missouri Highway and D St. in Park Hill, will have a seating capacity of 750 and will be of stadium-type design. Work on the new house is expected to start construction is expected to start soon, M. S. McCord, general manager of the Malco Realty Corp., announces here.

“The structure will contain a modern theater with a seating capacity of 750 persons, three stores 25 ft. in width each and one 40 ft. in width. Malco Theaters, Inc., which operates the Rialto and Princess Theaters in North Little Rock, has leased the building.

“The theater will be of stadium-type design and will have a small stage. Interior of the structure will be finished in ornamental plaster and treated for proper acoustics. The projection booth will be installed against the front, behind the loges.

“A parkway with trees and shrubbery will be in front of the building. Ample parking space will be provided on the premises. Space at one end of the parkway will be reserved for erection of a service station.

“Store fronts will be of plate and structural glass designed to suit the needs of tenants and in keeping with the general design.”The “D St.” mentioned in the article is actually called D Avenue, and is the beginning of the 3400 block of Kennedy Boulevard.

If there was also a house called the Park Theatre in North Little Rock, it had to have been the theater on Main Street, not the one on Arkansas-Missouri Highway/Kennedy Boulevard, and the address 406 might have belonged to it. The 400 block of Main Street is in the old commercial district of the town, and would have been a block or two from the Rialto and Liberty Theatres. We don’t have the Princess Theatre listed, but I would imagine it was in the same area.

The Park Hill Theatre actually opened on March 30, 1941, according to the April 11 issue of The Film Daily.

In the mid 1960’s, there were only two theatres and a drive-in open in North Little Rock—-the Rialto, Park and Twin City Drive-in. The Rialto on Main Street later became a radio station, The Park became a retail store(a women’s apparel store as I remember) and the Twin City was torn down.