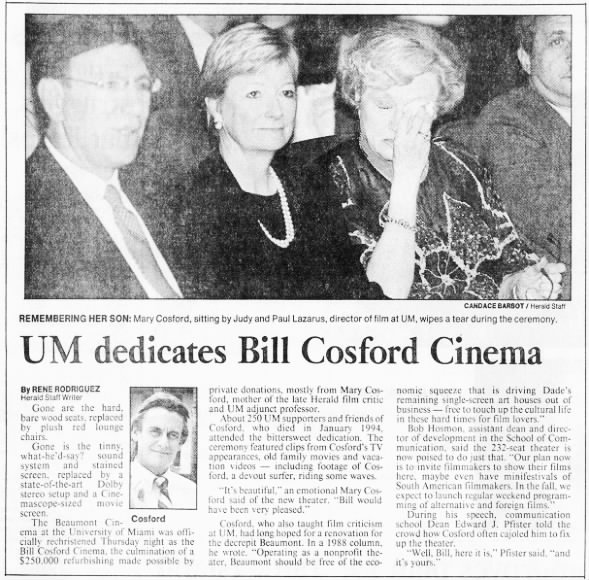 As an adjunct professor I believe Bill Cosford had an office on the first floor directly below the cinema when it was called the Beaumont. I remember walking by and seeing him at work in there through a window. (The film department offices have since moved to a new Communications building.)

I remember attending a Miami Film Festival seminar at Miami-Dade Community College in downtown Miami, probably about film criticism, where Bill Cosford participated as a panelist. ….. Less than a year later I heard he had suddenly passed away from an illness contracted during a ski trip vacation if I remember correctly.

When I was a University of Miami student from 1987-1991, the Beaumont was mostly for student use, for film premiers for the University community, for film students to screen their work, or as a classroom as needed, (though I had heard it was sometimes open to the public in the earlier 1980’s before I arrived).

Since being renamed in Bill Cosford’s honor, it has been open to the public on weekends as well as continuing to serve the students/University community.

I was surprised to see it missing from the Herald since they credit Bill Cosford for helping them serve the community on their website, hence the name change.

Al, I attended several times in the early 90s: I remember “Akira” and “Vampires in Havana” as playing there in 1990, and I attended one of those roadshow animation festivals around the same time. Think the Beaumont was only open over the weekends by then. If they were excluded from The Herald’s movie time clock, I’m guessing New Times was my source for showtimes.

Does anyone know if it was open to the public from 1987 to 1994 when it was missing from the Miami Herald movie time clock?

Years later, the animated Cuban feature “Vampires in Havana” went off without a hitch when it played the Beaumont (to a small audience when I was there), probably around 1990. (Less consequential than “Memories of Underdevelopment,” of course.)

I was here in 1981 for a Miami Q & A with Ralph Bakshi for the animated “AMERICAN POP”. When students started questioning him about his controversial older film “COONSKIN” instead, Balkshi had a fit and refused to answer any more questions.

The Beaumont was famously faced with an exploding projector when it tried to screen the Cuban made “MEMORIES OF UNDERDEVELOPMENT” sometime in the late sixties, after local theatre chains were intimidated into not showing the now classic film.