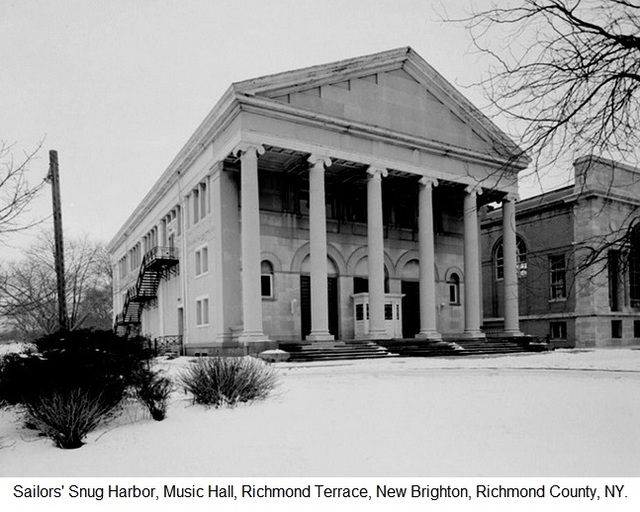 Located in the New Brighton district of Staten Island. I found this theater by mistake while biking. It’s a few miles from the St. George Ferry Terminal, along the water in NW Staten Island and is called Sailors' Snug Harbor. The address listed is for the entire place, the theater is inside along one of the many drives.

The place was founded in 1833 as a retreat for sailors and their families (and staff) as a haven and was a built-in, 130-acre, lush community with Chinese Gardens, trails and what’s considered to be the finest collection of Greek Revival buildings in the United States as well as a mix of Beaux Arts, Second Empire and Italianate.

Which brings us to the theater; the second oldest music hall in New York City; the
(Greek Revival) Music Hall opened in 1892 and was designed by Robert W. Gibson. Very boxy and beautifully ornate. Vaudeville artists performed there and silent movies were shown in 1911. They switched to talkies in 1933, weekly until 1965. It is open to the public and is free.