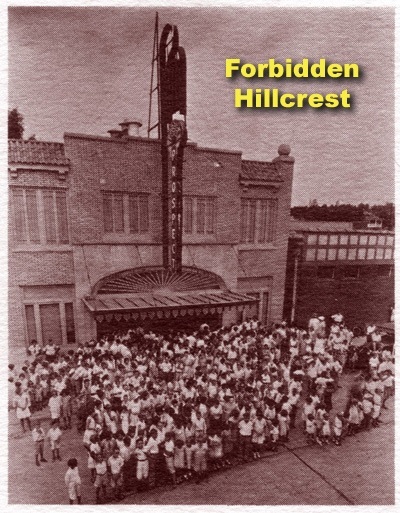 Opened March 29, 1926 with George Sidney in “The Cohens and Kellys”, the Prospect Theatre was a small neighborhood theatre with seating listed at 390. The article says the theatre was closed in the mid-1950’s. Info from the Historical Society magazine.

The Prospect Theatre was converted into a TV studio and was destroyed by fire in the early morning of November 1, 1957. The site is now a supermarket parking lot.

I attended the Prospect Theatre as a boy, growing up in LITTLE ROCK, Ark. — NOT North Little Rock, far across the river. The theatre was at 620 N. Beech St., LITTLE ROCK until it became Ark’s first TV studio, KRTV, 1952. A VHF stn., KATV, Ch. 7, succeeded KRTV, but a Halloween night fire destroyed the building, mid-1950s. It’s now the pkg lot for Hillcrest Kroger supermarket.

The item does give the location as Little Rock, not North Little Rock (see wjerdean’s comment previous to mine.) The reason Google Maps can’t find 620 N. Beech Street in Little Rock is because the street is now called Beechwood Street. Kavanaugh Boulevard, just north of the theater’s site, was once called Prospect Avenue. The correct zip code is 72205.

I found a web page saying that the fire that destroyed the theater building took place in 1957, but I’ve lost track of the link.

I believe you will find the studio/old theatre burned on Halloween night, 1957. I was 12, and my friends sifted through the ashes for film clips, etc. The KATV studio had a 300-foot mast erected nearby, taken down because local residents feared its falling. Next door was a delightful blue plate siner called Mrs. Treet’s. The whole area south of the theatre then was residential.

A picture of T.W. Sharp in front of the Prospect is in photos.

For completists: the fire was at approximately 3am on Friday, November 1, 1957 (the building was vacant). The newspaper’s front-page story made no mention of the building ever having been a movie theater. (“TV Studios Destroyed by Flames,” Arkansas Gazette, Saturday, November 2, 1957, pp. 1)

This opened on March 29th, 1926. Grand opening ad in the photo section.