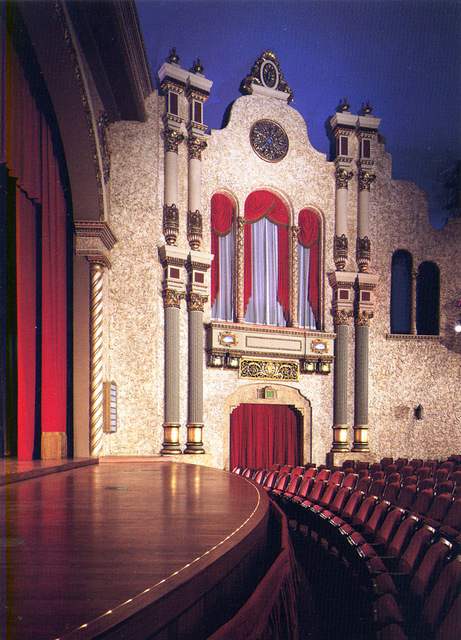 The opulent Sheboygan Theatre opened on February 18, 1928 with Laura LaPlante in “Finders Keepers” and 5 big time acts of vaudeville. It served as a 1,600 seat movie house for decades. It was built for the Universal Pictures chain, and in April 1930 was taken over by Warner Bros. Circuit Management Corp. In 1980 it was twinned and renamed Plaza 8 Sheboygan Cinemas I & II.

A restoration project was begun in 1996, four years after the theatre closed, when the Sheboygan Theatre was purchased by the Sheboygan Community Theatre Foundation, Inc.

The restored Sheboygan Theatre is now known as the Stefanie H. Weill Center for the Performing Arts.

Restoration photos for this theatre can be found at:
View link

“Sheboygan Theatre” Will Be Name Of New Amusement Place

Sheboygan’s new $600,000 palace of entertainment, now under construction at N. Eighth street and Niagara Avenue, will be called the “Sheboygan Theatre,” according to a definite announcement in
southern Wisconsin Press from the Milwaukee Theatre Circuit.
The community is looking forward eagerly to the time when this magnificent building will be completed.
A crew of seventy men is laboring long hours so that all work may be finished before April 1, 1928.
Pouring of concrete for the foundation footing has been completed and the erection of steel is now under way. The bricklayers will be ready to start within three weeks. Those who are familiar with the new Kenosha Theatre, which had its formal opening September 1, can visualize the beauty that brain and brawn will build into the Sheboygan Theatre. Said the Kenosha Evening News in its special theatre edition:
“Theatre lovers will be thrilled at the splendor and magnificence. It’s a far cry from the days when Spanish galleons were the pirates of the high seas and Pizzaro and Cortez conquered and plundered the fabulous riches of Mexico and South America, to this age in which men span the ocean in less than two days. Yet when patrons of the Kenosha Theatre look about them they will behold magnificence and dazzling opulence in an abundance undreamed of by those old Spanish conquerors."
Likewise, an advertisement of the United Studios, managers of the local construction project, appearing in the Exhibitors Herald, states that "the new $600,000 theatre at Sheboygan, Wisconsin, will
represent, when completed, all that modern thought can contribute to the motion picture theatre."
The new Sheboygan Theatre will have a seating capacity of 1,550. The main entrance will be on N. Eighth Street. The building will be of the atmospheric type, resembling an open air theatre.
There will be a 25-foot stage to permit vaudeville entertainment, as well as moving pictures produced by the Universal Pictures corporation under the famous Carl Laemmle, its guiding genius.

It was unofficially announced today that Warner Bros, one of the leading film companies in the United States, has taken over the Wisconsin branch of the Universal Theatrical Enterprises chain of theatres, and that the concern will assume ownership at 12 o'clock midnight tonight and will start operating these theatres Sunday.
Theatres included are the Sheboygan theatre, which was erected at a cost of $600,000 and which was opened to the public in 1928; Venetian theatre at Racine, Kenosha theatre at Kenosha, and all the Universal theatres in Milwaukee except the Alhambra. Among the Milwaukee theatres are the Lake, State, Downer, Juneau, Nation and Kosciuszko.
The deal, which has been in the course of consummation during the past week, involves millions of dollars in theatre values.
Manager K. G. Wood of the Sheboygan theatre today would not make official comment as to the completion of negotiations, but admitted that he was notified late Friday to take a complete inventory of his theatre, and to check meters at the close of business tonight.
The Sheboygan theatre is one of the most up to date in the state chain. It is equipped with the latest Western electric sound equipment, with new changes and installations made from time to time as improvements are made in the sound facilities. The theatre in Spanish atmospheric design has a seating capacity of 1,600.

February 18th, 1928 grand opening ad in the photo section as well as