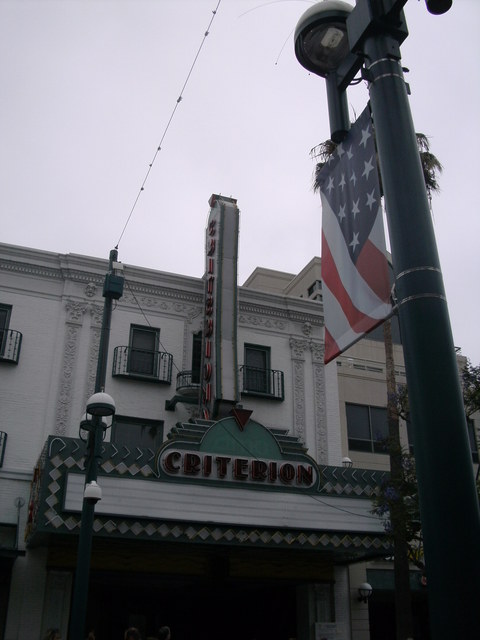 The original 1924 built Criterion Theatre, which was once part of the Fox West Coast Theatres circuit, was razed (apart from the façade) in the late-1980’s to make way for this newer 6-plex.

Sitting near the AMC 7 and the Loews Cineplex Broadway 4, this popular movie house is located on Santa Monica’s bustling 3rd Street Promenade.

Mann Theatres opened the Mann Criterion 6 on June 27, 1990. It was designed by Jeff Cooper Architects. In 2001 the interior and exterior of the theater were remodeled by architectural firm Behr Browers Architects of Westlake, CA. It was one of the most successful theaters in the circuit.

It was closed on March 30, 2013 the the building was gutted internally to become retail use.

Sadly, the blade and marquee have been removed…

I walked by the other day and the portion of the building that held the theaters has been stripped down to the beams.

This movie theater has been close for 3 years

Status should be changed to “Demolished.”

Not really demolished. The building remains. It was gutted out for retail.

The above description is not quite accurate. I worked in Santa Monica in the early-mid 1980s. The theater was not “razed around 1983” – it had to be later than that, either the late ‘80s or early '90s. And let me tell you, after the theater was sold by the Mann company (late '70s?) it went DOWNHILL just like the rest of the Santa Monica mall. At one time it was a .99 and even .49 theater showing double and triple “grindhouse” type fare. The poor manager made attempts at respectability but the majority of the audience was homeless or riff raff types. He even tried screening “The Ten Commandments” – for free – around Christmas time, thinking families might show up – but was horrified, or so I heard, when the theater was packed with transients.