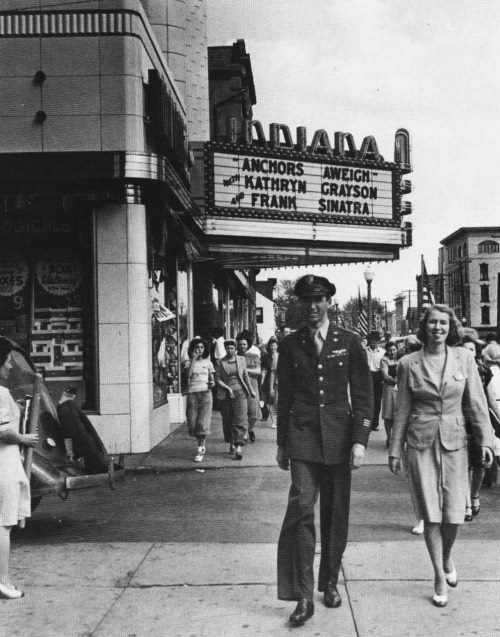 The Indiana Theatre was opened July 16, 1924 with Louise Fazenda in “Listen Lester”. It was equipped with a Marr & Colton 2 manual organ which was opened by organist M.J. Peris of Buffalo. It was taken over by Manos Theaters is 1933. It continued to at least 1950, when its seating capacity was listed as 747.

I have only seen the outside of this theatre a few times. I recently contacted the historical society in Indiana, PA and they informed me that it was used for live performances. I am not sure when it showed its last movie. It is now a church.

I just met a couple at a Labor Day weekend picnic from Indiana PA and they told me that basically one person saved this theater after much controversy and that it now has a ticket kios (which the Sept. 9, ‘05 photo doesn’t seem to show).

According to his biography, it was local architect Thomas R. Harley who reopened the Indiana Theater.

To correct a misunderstanding, Thomas Harley is an architect, and he reopened the Indiana Theater and became its operator after it had been closed for over two decades, but he did not design it. In fact the theater was built long before he was born. I don’t think there have been any major alterations to the house since he reopened it, either.

This theater has gone through some drastic changes over the years. A 1936 photo of the theater in the Arcadia Publishing Company’s Indiana, Pennsylvania shows a three story building with a classical facade. By the 1940s, the building had lost its upper floors, and there was a tall, streamilne moderne blank wall above the theater entrance. In the recent photos, the wall is gone.

A few items in issues of Boxoffice over the course of 1969 said that the Manos circuit, then operating the Indiana, had plans to build a second auditoriun as a “piggyback theater” above the house, but obviously nothing came of that plan.

I’ve been told by the curator of the Jimmy Stewart Museum, Tim Harley that the movie It’s A Wonderful Life starring Mr. Stewart is featured each November at the Indiana Theater.

Mr. Harley is the curator of the Jimmy Stewart Museum in Indiana PA. In these times any donations to the Museum by those of us on Cinema Treasures would be greatly appreciated I’m sure. Thanks.

‘Gang War" Picture Too Hot for Indiana Theatre; No Confusion.

A small fire which was extinguished before the Indiana firemen arrived occurred in the projection booth at the Indiana Theatre, last evening about 8:40. The blaze was caused by the breaking of a film. The damage was not over $100, $50 of which was the value of the film. Frank Kelly, the machine operator displayed courage, when he extinguished the blaze with his fire extinguishers almost before anyone in the audience knew anything was wrong. The local company was notified and in record time were on the scene. The booth, which is fireproof and which has attached fireproof shutters which close, was filled with smoke as the hissing film burned up. The film was inside the projection machine and the small blaze and smoke emerged from all the openings. All other films are kept in fireproof boxes until needed, so that there was no trouble from them. Mr. Kelly stated this morning that the fire was caused by the broken film igniting from heat from the light used in the film machine. About 200 people were in the theatre at the time, and they behaved in a wonderful way. Some never knew until it was all over that anything was wrong. Some never moved in their seats. The music was continued and most thought that just a break had occurred in the film and that it would continue soon. The reel of film that broke was the 5th reel of “Gang War”, and that scene that was being shown was one in which a lot of action was taking place, shooting etc. The theatre management wishes to thank the people for the wonderful way they acted and want to assure them that there is no danger, that everything is fire proof around the booth. Tonight the picture advertised will be shown, just as usual.

I attended IUP from 1971 through 1975. During that time, there were 3 indoor theaters in Indiana, PA…the Indiana and Manos on Philadelphia Street and the Cinema inside of Regency Mall on Route 286. There were also two drive-ins outside town. I saw many films at all 3 indoor theaters as the film critic for the Indiana Penn back then. The Indiana Theater and Manos theater were run by the Manos chain. The Indiana got the bigger pictures while the Manos generally changed its program each week. One of my biggest memories of the time was being part of a group of freshman guys from IUP’s Rooney Hall all trooping up the street to see “The Stewardesses,” an X-rated picture in 3-D. We sat next to an elderly couple who got up and went out to demand their money back. Apparently they thought they were seeing Dean Martin in “Airport.” :–)

A story about Indiana’s theaters in the August 8, 1966, issue of the Indiana Evening News said that the Indiana Theatre opened on July 16, 1924. The rear portion of an existing building had been demolished to provide room for the auditorium, and the entrance was run though the existing structure. The Indiana Theatre had a two-manual Marr & Colton organ.

In 1933, the Indiana Theatre was sold to Michael Manos' Monessen Amusement Company, who also took over the Ritz Theatre the same year. As the Indiana was a Manos house, it is almost certain that the remodeling of the theater in the 1930s was designed by Victor A. Rigaumont, who as far as I can determine designed all the Manos houses built or remodeled during that period.

Now it appears to be part of Amplify Church: http://www.amplifychurch.com/indianacampus

M.J. Peris of Buffalo was at the Marr & Colton organ for the opening of the Indiana Theatre which launched with Louise Fazenda in “Listen Lester” on July 16, 1924.