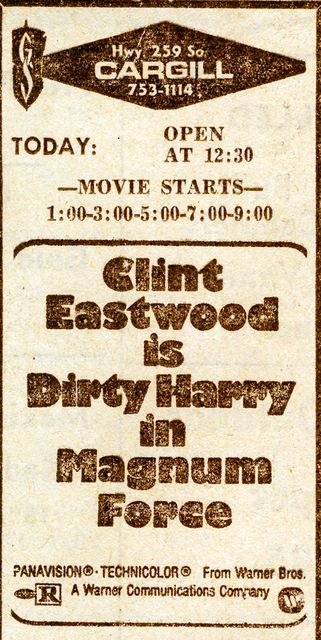 The Cargill Theater opened as a single screen movie theatre May 23, 1968. After enlarging to several more screens and under different owners, it was closed by Regal on May 27, 2013.

I don’t know what the official address of this theater is, but the google map link is incorrect. That section of highway changed from US259 to SH31 more than 20 years ago, but is also called W. South St. The theater is next door to Gorman-McCracken Volkswagen. The closest address that I can get to it on google maps is 720 West South St.

I was present at the grand opening of the Cargill Theater as a member of the Spring Hill stage band who was asked to play for the event. I sat next to my best friend Gordon Green. We both played the trombone. Gordon is a urologist in Marshall now. We had the Lawrence Welk type of music stands and wore black suits and ties. It was a lot of fun and a very memorable event.

The official address is 120 US highway 31. The grand opening was May 22, 1968, split into three in 1971, sixplex in 1986, and a nine house theatre in 1993. We’re now owned by Wallace Theatres which bought out Hollywood theatres in the 90’s. Now we’re Hollywood Theatres Movies 9. I found this out from a note from a previous projectionist left in one of the breaker boxes.

The way I understand it. The theatre shut down for a short time and was then reopened as a 2nd run discount theatre. The theatre is now facing the possibility of closure at the end of the year.

Sadly, it did. There was too much that needed repaired and Regal wasn’t prepared to spend the money at the time. Projectors are now sitting in a scrap yard.

This opened on May 23rd, 1968. Its grand opening ad can be found in the photo section.