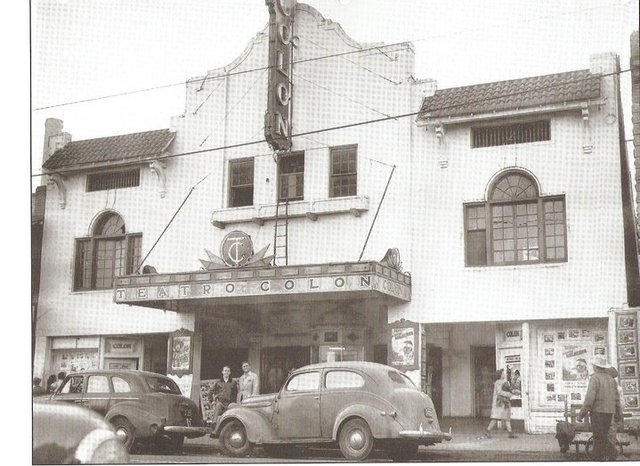 The Colon Theater was opened November 27, 1919 with the opera “Aida”. It was designed by architect Percy W. McGhee in a Spanish Colonial style. Later given a Streamline Moderne style to the plans of architect Otto H. Thorman, the Colon Theater once screened Spanish-language films but today houses a retail establishment.

Please note spelling of theatre, in neon, above marquee. There is an ACCENT mark between the L & O. It would be pronounced the same as COLOGNE.
This theatre has nothing to do with the human bowel system.

Thanks Larry, COLOGNE does smell better.

I am a Colon… It was really awesome for me and my family to get a tour of this theater. The family crest hangs in the theater today. I’m glad I got to share this experience with my mother, to remember when she and my father, Joseph Blas Colon used to go on dates during their youth in El Paso. My father is now deceased but I have many memories and proud to be a Colon. By the way… The accent mark is supposed to go over the second “o.”. (iPad does not have special characters so I can’t type it here.)

Is that the crest hanging above what was the screen in the 1/24/09 shot I posted earlier?

This opened on November 27th, 1919. Grand opening ad in the photo section.

Teatro Colon appears to have gone out of business after over 60 years of operation on December 31, 1980 although could have continued past that date. Eduardo Diaz, Sr. served as its main projectionist there for over 40 years. It also housed a district office of Azteca Films Distributing which sent Spanish language films to theaters in the Southwest. Much as happened with the Hollywood studios, Azteca was sued when a competing theater in another city said the Azteca run theatre controlled 90% of its own bookings which they felt was an antitrust violation.

The papers of architect Otto H. Thorman show that he designed alterations for the Colon Theatre in 1943. The original architect of the 1919 theater was Percy W. McGhee.