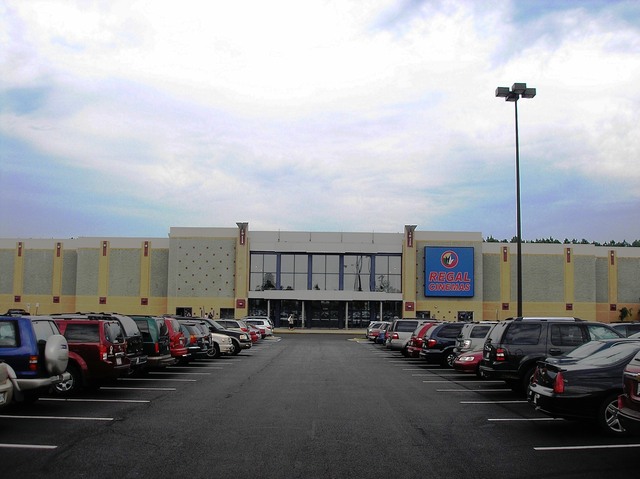 This sprawling fourteen screen multiplex opened under the Hoyts Cinemas banner in 2000 then later was acquired by Regal when Hoyts began divesting itself of its North American holdings.

Let’s just say… …this theater is pretty lousy. The last two movies I saw in this theater were “The Hunger Games: Mockingjay Part 2” and “Zootopia”(my personal favorite movie).(I saw them in LIMAX AND LIMAX 3D respectively. That is how a normal movie theater installs IMAX equipment in their normal multiplexes not big enough to fit a real IMAX screen.) When I went there both times, the theater was almost empty. And both of them were films that made a lot of money at the box office(especially “Zootopia” and it’s VERY well deserved 1.02 BILLION dollars it made at the worldwide box office). That is definitely due to the age of the theater. It has the same set up as the Regal Bowie Theater(and that can definitely explain since Hoyt’s opened both theaters(back before their USA division was acquired by Regal in the mid 2000s) back when they opened in the late 1990s/early 2000s.), with the uncomfortable seating and poor set up and smell. The IMAX 6.1 sound quality is as AWESOME as usual, but it doesn’t compare to the 12.1 sound that the Airbus IMAX Theater, Universal Cinema, and especially the AMC Lincoln Square IMAX theater has(in fact, all three theaters use the IMAX Laser projection system), but that doesn’t make a poor theater any better. Just like the Regal Bowie theater, this theater is in SERIOUS need of a renovation.

Maybe they’ll put in an RPX screen and renovate the imax .