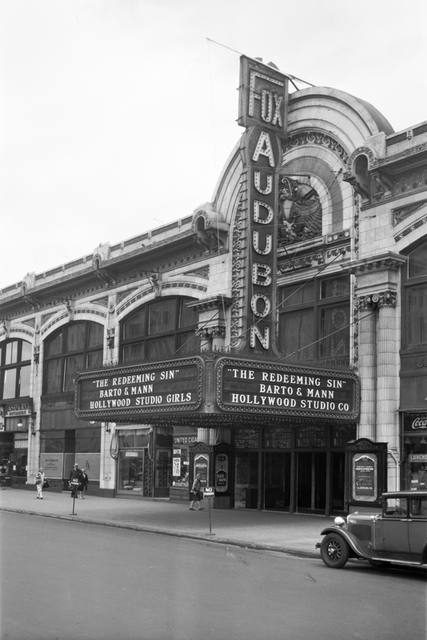 Built in 1912 for William Fox’s fledgling film company, the Audubon Theatre & adjoining ballroom was designed by Thomas W. Lamb. The 2,500-seat auditorium was on the main floor at the southern end of the building, while the ballroom was upstairs on the northern end of the building. In 1915 the theatre auditorium was equipped with a 3 manual Moller organ which had 24 stops. On November 17, 1923 it was replaced with a Moller 3 manual 15 ranks organ which had 1,150 pipes.

Known for its spectacular polychrome-terra cotta façade. In a lunette over the main entrance is a beautiful depiction of a ship’s prow, with the head of Neptune over it. By December 1945 it had been renamed Beverly Hills Theatre playing movies and vaudeville programs. It went back to the Audubon Theatre name and was still playing vaudeville & movies in November 1948.

Long a center of culture and entertainment, the Audubon Ballroom is still best-known today as the place where Malcolm X was assassinated on February 21, 1965 while giving a speech.

Films ceased in 1980 and the theatre closed. The building fell into disuse and disrepair and was demolished in 1989 apart from the façade on W. 165th Street. It was acquired by Columbia-Presbyterian Medical Center in the mid-1990’s.

A new structure erected behind the historic façade, where the Audubon Theatre had stood. Known today as the Malcolm X and Dr Betty Shabazz Education & Research Center. Inside the center is a memorial to Malcolm X. Some parts of the Audubon Ballroom still remain in some sort of use.

The ornate terra-cotta façade was meticulously restored and brought back to its 1910’s appearance, making it quite an eye-catching sight.

Here is some architectural detail:
http://tinyurl.com/2kwk8j

Does anyone have any knowledge of a HUDSON theatre in north Manhattan?

It appears in the 1934 Film Daily Year Book as located at 1268 Amsterdam Avenue but newspaper ads in 1921-22 place it close to Audubon Avenue and 167th street.

My mistake, LM, it is 1968, but that still maps near Lincoln Center.

I believe the reluctance by CT editors to list the aka names (Beverly Hills, San Juan) may come from the fact that these theatre names co-existed with the Audubon ballroom and that the San Juan theatre was reportedly demolished while the ballroom was not.

Please note from the introduction that the ballroom on the northern upstairs end of the building where Malcolm X was shot was a separate entity from the Fox theatre on the southern downstairs end and that the eventual demolition was only a partial remodel of a wrapped building housing both.

While the Audubon Ballroom still stands in some form, the cinema end, the Fox Audubon (Beverly Hills, San Juan) theatre listed here, is for all practical purposes, demolished.

any photos of the theater in its early years as the Audubon?
for instance when “Down To The Sea In Ships” played a neighborhood
engagement after an exclusive 3 month run in Times Square?

Pretty much the same as them ‘jabbering away’ in English to many of us.

Click here for an exterior view of the Fox Audubon Theatre in 1929.

The San Juan was still operating in 1977.