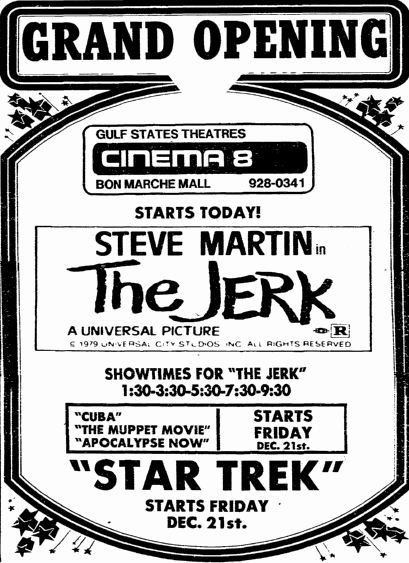 Gulf States Theaters opened Baton Rouge’s first multiplex (reported to be among the highest screen counts at the time in the country) with Cinema 8 at Christmas of 1979. Opening day attractions were "Star Trek" (2 screens), "The Muppet Movie," "Cuba," "Roller Boogie," "The Jerk," "Apocalypse Now" and "Starting Over." The theater was immediately popular and began to attract all first-run bookings after the first few weeks of mixed first and second runs.

Only two of its initial eight houses were truly of quality, seating about 350 each and featuring full stereo surround. The unfortunate smaller houses were either small square or, worse, long and narrow with small screens and mono sound. Many first class movies suffered over the years from being relegated to the lesser houses. Sellout crowds were frequent nonetheless.

In October 1983 a ninth small screen was added, and by Christmas, two more houses down the mall. One was large and the other small, but both did feature surround sound. United Artists took over the operation in the mid-1980’s, operating both this and the Bon Marche Twin in the back lot of the mall.

In 1991, the Cinema 11 was adding four more mid-sized stereo houses to the 1983 addition area just as the old Twin was closing for good. By Christmas 1991, Cinema 15 was the official operation. It lasted another eight years and closed in late-spring of 1999. The theatre and mall structure still exists, but have been converted to an office and technological park.