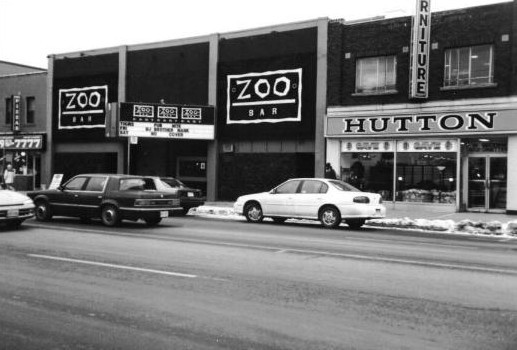 The Grover Theatre is listed as open in editions of Film Daily Yearbook since at least 1941.

After closing as a movie theatre, it housed a nightclub called Funhaus, which became Spectrum.

In 2008, the building has been converted into a hostel for the homeless, named Heyworth House.

The information is incorrect for this theatre. This former movie house (now a men’s shelter) was located at 2714 Danforth Avenue. No longer identifiable as a movie theatre.

Chad mentions that the Grover Theatre was opened “since at least 1941”. I have run across some information that indicates it was opened at least a bit sooner. My father was born (1916) and raised just a block south of the Danforth and when reading over his diary he made the following entry for Friday October 25, 1940 – “After supper I called up Clarence and we went to the Grover Theatre . We saw â€œTwo Girls on Broadwayâ€ (released: April 19, 1940) and â€œ20 Mule Teamâ€ (released: May 3, 1940).

The Grover originally called the East Danforth was again one of the many many B & F neighbourhood theatres in Toronto. B & F theatres were controlled by Famous Players and usually played 2 or 3rd run double features!!