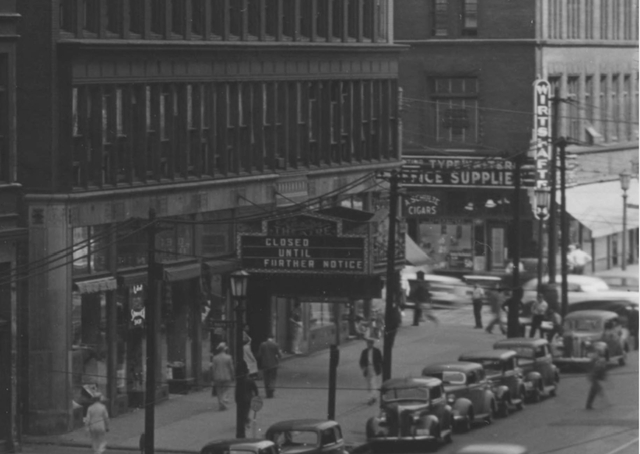 Even though it was located almost exactly at E. 9th Street and Euclid Avenue, very near the the Hippodrome Theater and Embassy Theater, and also just a few blocks from the grand theaters at Playhouse Square, and operating during the golden days of all those theaters, the Carter Theater is almost forgotten.

According to the online Encyclopedia of Cleveland History, "It opened on October 26, 1913 as the Miles Theater under the direction of president and general manager Chas. H. Miles. The 2,000-seat theater cost nearly $500,000. Billed as "America’s most beautiful vaudeville palace," it was decorated in the Louis XIV style in a color scheme of old rose, ivory, cream, and gold, with DuBarry damask on the walls and mahogany seats upholstered in rich green velour, which matched the carpeting. The stuccoed walls contained two French murals on the spaces over the proscenium boxes. The auditorium contained twelve proscenium boxes, twenty-six mezzanine boxes, and two aero boxes. The backs of the seats were equipped with slot machines that would dispense candy for $.05. In 1920, the Miles Theater became a burlesque house and changed its name to the Columbia Theater.

Movies were introduced in 1931, when it became the Great Lakes Theater. Between 1935-37 the theater suffered an identity crisis. For a while in 1935 it was called the Miles Theater again and featured vaudeville and first-run movies, then it was a movie theater called the Carter Theater. In 1936, it became the Federal Theater–part of the Federal Theater Project of the WPA.

Operating as the Miles Theater again, it was called a "flophouse with a soundtrack" according to a 1937 article in the Plain Dealer. Sometime in 1937 it became the Carter Theater again, owned by the Community Theater Circuit.

they must have played off the Carter (aka Pick-Carter) Hotel that looks like it was caddy corner to the theatre. Did this site wind up being part of the Cleveland Trust tower?

The theater site is occupied by a shorter, rather bland office building on the other side of Barn Court which run behind the Cleveland Trust tower.

I do not know if the the Carter Theater had any real connection or played off of the naming of the nearby Carter/Pick-Carter hotel or not. A strong possibilty is that either or both may have been named for Lorenzo Carter who was an associate of Moses Cleaveland (for whom the city is named, minus the first ‘a’) and
one of its pioneer residents.

The Encyclopedia of Cleveland History actually says that the Miles Theatre opened on October 26, 1913. Items in trade journals from the period indicate that the house was under construction for over a year.

The Cleveland Landmarks Commission identifies Lewis W. Thomas as the architect of the Miles Theatre.

The April 13, 1937, issue of Motion Picture News said that the Carter Theatre in Cleveland, which had not operated as a movie house for a year, was being redecorated by Community Circuit Theatres and would reopen with films on May 1.