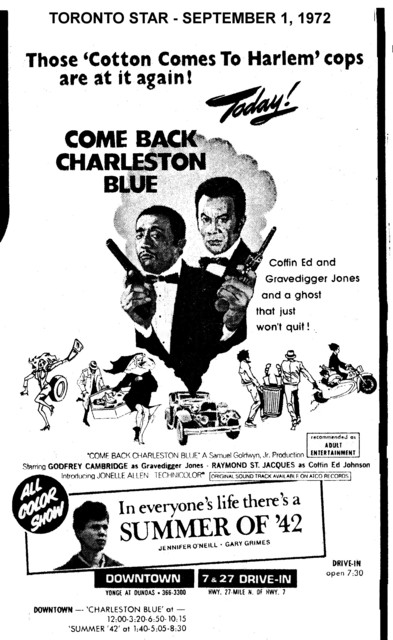 This was a great drive-in! It was one of the last drive-ins constructed around ‘68 or '69 in Toronto. It was originally a single screen theatre when it opened, and held about 1200 cars. It was made a twin the same year the 400 was, back in 1978. The 7&27 seemed to be the forgotten drive-in of Toronto. Most people would go to the 400 first, then the 7&27 after if the 400 was sold out. I think this was largely due to location. The 7&27 was northwest of the city, unlike the 400, it was not close to a 400 series highway, and not central. The snack bar was huge in this theatre. It featured a horseshoe shaped concession counter, which was a design that was mean’t to speed up the process of cashing out patrons during intermission. When I went to this theatre through the '80s, there was nothing around it. By 1997, when the theatre closed, it was surrounded by homes, and a mall. I was sad to see this theatre go, like the 400, because there were a lot of great memories attached to this and the 400 Drive-ins.

I was only at the 7 & 27 Drive-In two times, so I dont remember to much about this Drive-In, but your right it did have a huge horseshoe shaped snack bar and it was located pretty close to the 400 Drive-In.

The 7&27 Drive-in was everything to me since age 7 and then THEY took it away. It was the very first drive-in I ever went to and it broke my heart when Famous Players desided to give up on it Labour Day of ‘1997.
It had 2 screens, one which was so big you could see it from as far away as Highway 50. I remember driving up to it for the first time that one unforgettable night when I was 7 and just gasping at the size of that beautiful screen that towered over a great parking lot. I was amazed by the concession building and that captivating aroma that was nothing like that of an indoor. I couldn’t believe the size of the two projectors I spotted in the room with the door slightly open. Everything completely blew me away. I was only 7 and already I had found my pride and joy and favourite place in the entire world.
For years after I returned to the 7&27 my eyes glowing more and more everytime. It always remained my favourite place in the world, along with the 400 Drive-in which was only about 15 minutes up highway 7 from the 7&27. Both drive-ins became my whole life.
Ofcourse, beeing owned by a greedy corporate dinosaur, they could not last and I received the heart-breaking news only a week before Labour Day that I would only have one more chance to visit the 7&27 drive-in. That last night there was the hardest day of my life, but the most difficult thing in the world to do was to drive away after the double feature watching it disapear as we drew farther apart.
Both 400 and 7&27 were closed down on Labour Day along with a handful of drive-ins Famous Players owned including the Sunset in Brantford, Ontario. This was to make way for Famous Players’ multi billion dollar expansion of multiplexes. I discovered the 7&27 and 400 were completely gone on Thanksgiving ‘1998. This killed me and after I had been told not long before they would re open in a few years. Basically, I had lost the two things that meant everything to me and Im sure most people know how that feels.

That all Toronto got for the Centennial of Canada, Montreal got EXPO ‘67 (which had many cinemas), The Metro and an new expressway network and three new cinemas (Place Bonaventre, Atwater and Place Du Canada.)

Opened with “Don’t make waves”, “Return of the seven”, “Corridor of blood” and “Werewolf in a girls dormitory”.