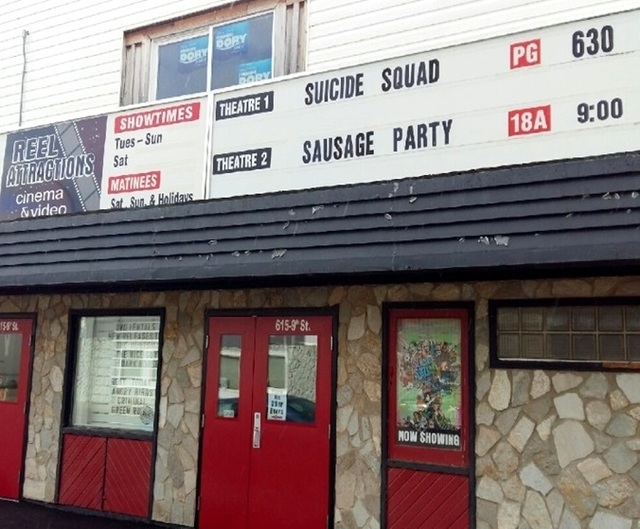 The 400-seat Lux Theatre was opened on February 10, 1948. In 1977 it was renamed Golden West Cinema. Soon after it was twinned. It was renamed Reel Attractions Cinema in 2007 with seating provided for 99 and 79 + 1 wheelchair space. Both screens are equipped with Dolby 7.1 surround sound and digital projection. Business hours are Mon-Fri 5pm-10pm; Sat-Sun 1pm-10pm. Showtimes Tuesday to Sunday evenings, and offers afternoon matinees on Saturday & Sunday only. Take-out popcorn and concession snacks available every day during business hours. Special showings and birthday party packages available. Call for details. DVD movie rentals also available with membership.

A number of upgrades have been carried out since new operators took over in June 2014.

The house now known as Reel Attractions Cinema began showing movies as the Lux Theatre on February 10, 1948, though the formal grand opening did not take place until February 28. Owner Frank G. Bailey built the house as a replacement for his original Lux Theatre (located just south of the new house) which he had opened in 1911. The new Lux originally seated over 400. The Bailey family owned the Lux until 1960.

In 1977, the name was changed to Golden West Cinema by new owner Bernard Besenski, who owned the Golden West Drive-In near town. Sometime during this period the theater was twinned. The house became the Reel Attractions Cinema in 2007.