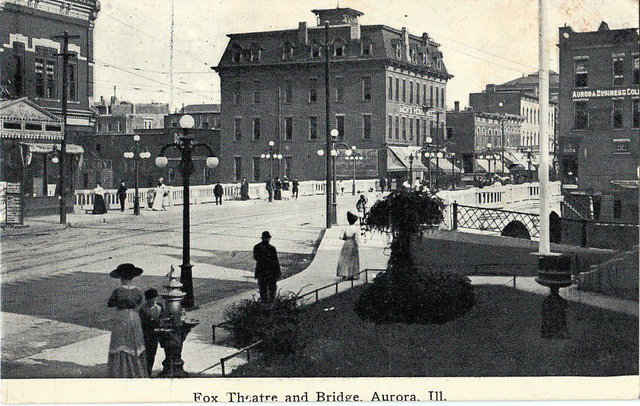 The Fox Theatre was briefly known as the Coliseum Theatre when it opened in 1910. It sat about 1,160. It was named not for the theatre chain, but rather for the former name of the street it sat on, Fox Street (now called Downer Place), which, in turn was named for the Fox River, which the city of Aurora sits on.

The building’s facade is of red brick and ornate cream-colored terra-cotta, including a medallion over the large arch window depicting a fox.

The Fox Theatre was closed in 1930 and partially razed. It has since been used as retail and office space, though it has been vacant for many years. Just recently, a group called Aurora Downtown acquired the former theatre, with plans to redevelop it, either for cultural purposes or for a mixed retail/loft use. The group has pledged to retain the facade, which is the building’s best-remaining feature.

This Fox Theatre is different from another Fox Theatre in Aurora, not far away, which was originally called the New Fox Theatre. It was a 600-seat Art Deco house open from 1937 to the late-1970’s.

The other fox, which I can’t seem to find a listing for, was designed by william barfield, who also did the hinsdale

Eyeland Optical at 26 E. Downer Place has its entrance roughly where the ticket booth would be.
http://tinyurl.com/587kr9

The records of the American Terra Cotta and Ceramic Co. list the Fox Theatre in Aurora as the work of an architect named Barfield. As the records also list him as the architect of the Hinsdale Theatre in Hinsdale, Illinois, it must have been William G. Barfield.

Barfield immigrated to the United States from England in 1882, establishing his architectural practice in Chicago, where he worked until his death in 1935.