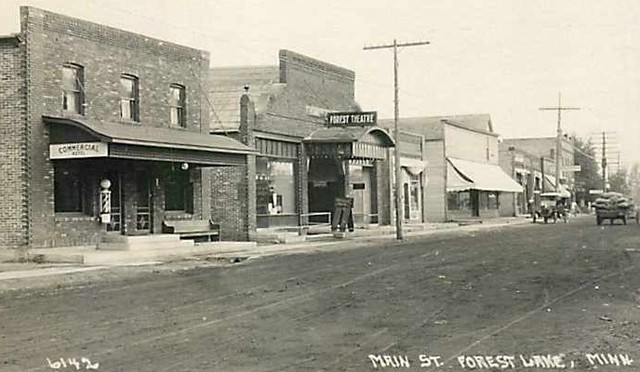 The Forest Theatre opened by 1916 with seating listed at 320.

The theatre was converted into a twin and was closed on May 29, 1990 with Sean Connery in “Hunt for Red October” & Tom Cruise in “Born on the Fourth of July”. It has since been converted to office space. The building itself is still called the Forest Theatre Building.

There’s a lengthy, history-packed article in yesterday’s Forest Lake Times marking the sale of the Forest building to “a partnership group of Bob Anderson, Matthew Anderson and Natalie Harrer. … The bar and restaurant is slated for major remodeling and a future operation as Fireside Getaway.”

“The earliest I have in my archive is from the May 20, 1916, edition of Motion Picture World, which said, ‘The new Forest Theatre has been taken over by F.W. Walker.’”

There were at least eight ownership changes through the years.

“Three years after taking over the operation, the Fladlands (Jackie and Dwayne) opened Forest II in April 1980. The 89-seat auditorium allowed the owners to showcase two feature films. The main auditorium, Forest I, had seating for 264.”

Last tenant was Downtown Intimates lingerie and CBD products as June 2019. Original facade has been stuccoed over but shape remains.