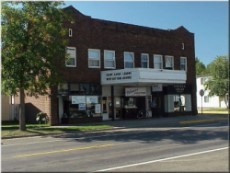 The West End Theatre was located a little to the west of downtown Winona. The theatre was opened by Colonial Amusement Co. on January 16, 1921 with seating listed at 518 and was half the size of the State Theatre which would open in 1930.

I’m doing some research on all of the old movie theaters in Winona. I did find another one called the Broadway Theater, which was located at 724 E. Broadway Street, which is a little bit east of downtown Winona. I found movie listings there as late as 1941. I also learned that after being closed for several years, it re-opened as a grocery store in the summer of 1955 (as the Broadway Super Saver). There was a small fire there in 1967, but I believe the building is still standing. I’ll share anymore information I can find, but the Broadway should be listed.

I’ve just added a photo of the ad for the opening of the West End Theatre on January 16, 1921.

The finding aid to the Liebenberg & Kaplan papers indicates that the firm did remodeling work on the West End Theatre in 1931 and again in 1936. There’s no indication of the extent of the projects, but given that the house was only opened in 1925 they were probably not major.

Just a little clarification. The West End opened on January 16, 1921. It was started by the Colonial Amusement Company. I agree that any remodeling was probably pretty minor.

Thanks for all the info added for this one in the past few days. The exact closing date of May 31, 1957 and the exact re-opening date of October 9, 1968 (as the Cinema) should be noted above. Also, I think we’ve firmly established that the State opened in 1926, not 1930. Sorry to be a pain, but I’m a stickler for the facts.

Don’t know if anyone still goes on here, but this is now apartments and a couple store fronts. The old movie title display is still out front. I live in one of the apartments :)

Opened with a Harold Lloyd comedy(not named), and “Back to God’s country”.