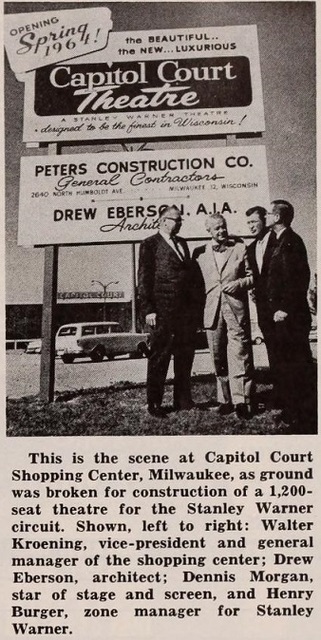 The Capitol Court Cinema opened as a single screen cinema in 1964. It was twinned in 1975 with seating listed at 625. It was operated by Marcus Theatres.

The cinemas closed in 1989 and has since been demolished. There is an IHop where the theatre once stood. Any further info on the Capitol Court Cinemas would be appreciated.

This opened on May 27th, 1964
Open the box of microfilm and put it into the machine at
View link
after you are done, kindly rewind it.

This was opened by Stanley Warner Theatres and taken over by Marcus later on.

I don’t know where the 625 seat capacity came from but it’s not even close! When this was a single it had somewhere in the vicinity of 900 seats, maybe a 1000, and it was without a doubt the finest film presentation house in Milwaukee. I worked there as a relief projectionist from time to time, it’s the only booth I’ve ever worked in that had house light level meters so the projectionist could judge light levels without guessing! It had a huge 70mm screen which rarely saw any 70mm use, but the scope 35 screen size was nothing to sneeze at. The neighborhood “slipped” and the film bookings stunk and then Marcus got hold of it and made to “bowling alley” theaters out of it. It’s too bad they couldn’t save it, it was a great film house!

Actually Marcus Theatres bought it from Warner Brothers on October 1, 1976. They twinned it a few months later giving it two theatres with 600 seat capacities and a common lobby.

I went to the Capitol Court Theater many times during the 1970s. The first movie I saw there was Funny Girl, which was on the screen when it was a one-screen theater. I also saw The Godfather, Lady Sings the Blues and Save the Tiger there. When it had been made into a twin, I saw (my last film there) The Slipper and the Rose there. That last one didn’t play many places around the country, so I’m pleased that I saw it there. I’m sad to know that this theater has been demolished.