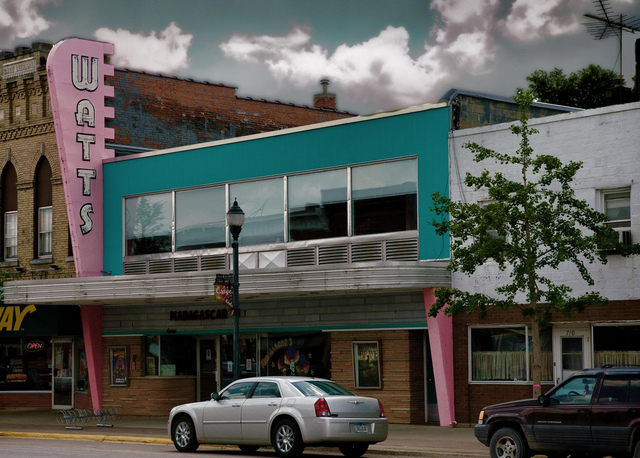 The Watts Theatre was opened on February 16, 1950 by the Jim Watts family, with a showing of "Dancing in the Dark." The 44 by 132 foot building was designed and built as a state-of-the-art theater and included 676 seats, all on a single level, and there were living quarters provided upstairs for the Watts family. Initially, the Watts Theatre was equipped with a small electronic organ, which was located on the right-hand side of the proscenium, and it was played before and after the shows.

In 1994 Paul and Gloria Bunge purchased the building (which had been closed and stripped of all its equipment and seating) and restored it to its previous glory, including new heating and air conditioning, new projection equipment and a new sound system. The Bunges widened the aisles, left more room between rows, and installed 364 new seats designed for the building.

I personally knew Jim and Millie Watts, nice folks who had a dream. Jim was a commercial artist and he had a rendering of the theatre that he did and it came off just as he designed it. I still have one of their opening brochures showing off Jim’s art work. The only problem was that to build new theatres in the 1950’s was risky, because about ten or fifteen years later tv became a keen competitor…but it seems to do well as I drive by there every now and then you can’t miss it on the main street which is also state hwy 9…..thankfully there are people who appreciate a good theatre and restore them. The theatre contractor was E.W. Epperson & Co. of Sumner, Iowa

My name is Enrique and I am a student at the art institute of California. I am currently conducting research for my thesis project, i read on one of your comments for the California that you were manager on site. If I could only ask you a couple of questions that would mean allot to me.
enrique——.edu

Here is a b&w photo:
http://tinyurl.com/ylbekrt

Boxoffice of January 6, 1951, published a two-page article about the Watts Theatre.