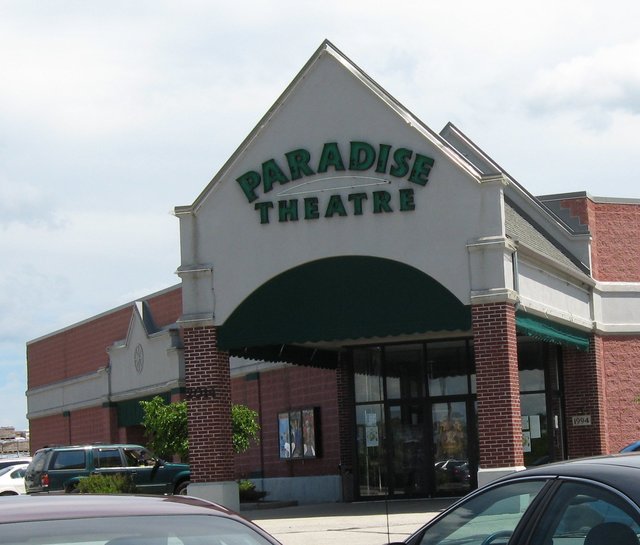 The Paradise Theatre was opened in December 1994. It had 6-screens with sloping floors and operated as a newer multiplex type theatre with double the amount of screens as the downtown West Bend Theatre of 1929 vintage (today the West Bend Cinema Brew House which in 2018 they are trying to reopen). Around 2003 an additional 4 stadium style ‘stealth’ screens were added in the back end of the building bringing the total number of screens up to 10 and the total seating capacity was 1,870. During the addition, the ticket booth/office was removed from the front lobby along with the arcade in order to extend the concession counter to what it is today. It was round this time that Nova Cinemas started working with the management company for this theatre and other theatres across Wisconsin (Hartford, Showboat in Lake Genevva, White Water Theatre.) Nova Cinemas was in charge of the business until they went under around 2010/2011.

After Nova Cinemas it was privately owned and still retained the Paradise Theatre name up until the end of February 2016. During the time period in February 2013, brand new Christie digital projectors were installed and replaced the old 35mm film ones. However, at about late-2013 attendance was starting to decline and unfortunately stayed on that path until the Paradise Theatre closed its doors on the last day of February 2016. Almost as soon as the closing was announced though, it was also announced that there were new owners who had stepped in and wanted to update the theatre and rename it West Bend Cinema.

For the first 18 days of March 2016 some major updates were done to the theatre - there was new carpeting, new paint, new bathroom fixtures, and new lighting installed throughout the building. Perhaps one of the most substantial changes was a deep and thorough cleaning done throughout all the auditoriums as well as neglected maintainance was finally completed as well (broken bathroom fans, ripped screen masking, etc.) However, as of March 18, 2016 the theatre was renamed West Bend Cinema and was reopened. It was still independently owned and operated. Much of the staff was a carryover from the Paradise Theatre, and almost everyone put in a significant amount of time and help into getting the theatre open within those 18 days.

After the theatre had reopened it took a little bit of time to get word out that such a significant change had taken place. Not only that, but the attendance certainly didn’t change overnight either. The demand for new seats was at an all time high as well as there were still the original seating throughout the building and the surrounding theatres in the area had already upgraded. Eventually though in December 2016, the front 4 auditoriums (4/6 original rooms) were upgraded with brand new recliner seating. (It was a pretty tight job and there were just 4 people doing the install, and it was completed just 45 minutes before the Thursday night premiere screening of “Rogue One”) Almost exactly a year later (December 2017), a day before the premiere of “The Last Jedi”) the final 2/6 original auditoriums were also upgraded with the same type of recliner seating. The new seating was all completely installed in the original part of the building as 2018 started, however the stadium seating in the back 4 screens still need to be replaced. The roadblock here was that due to the structure of the rooms, the same style relcliner seating could simply not be used. However, extra-wide rocker style seats were used instead, and could provide a significant upgrade. All of the stadium rooms were more of less identical and all seats were replaced in May 2018 (coincidently, these rooms were also finished right before “Solo:A Star Wars Story” was screened.) The total seating capacity has now been reduced to 827.

The theatre has really been brought up to more of today’s standards as it has new seating upgrades, and also offers amenities such as pizza and alcohol option at the concession stand. The West Bend Cinema is now the the largest (most screens, 10) ‘independently’ owned theatre in the state of Wisconsin (the other large one is Schubert’s Luxury 10 in Beliot, however Schubert Theatres run this one and the Hartford Theatre, while the West Bend Cinema is on its own) Not many photographs of the theatre interior exist before the West Bend Cinema was upgraded, but we are always on the lookout.

No longer operated by Nova. This theatre closed and then reopened March 18, 2016 under the name of West Bend Cinema.