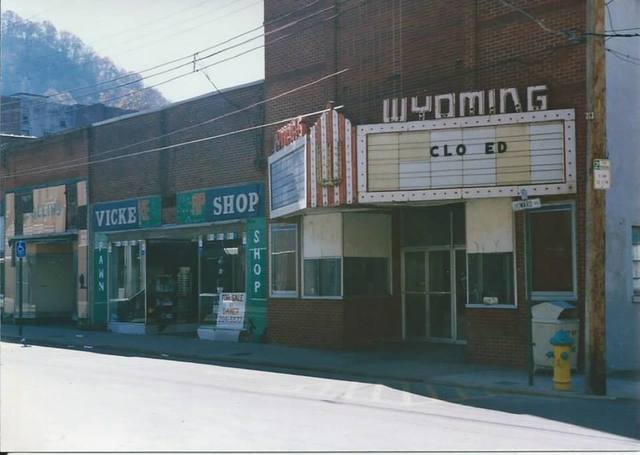 There were at least two theatres in Mullens. The Rialto Theatre was on Moran Avenue at First Street and the Wyoming Theatre was on Howard Avenue at 2nd Street, which opened in 1918. It suffered a fire in the early-1950’s.

I never remember the Rialto Theatre being open but the Wyoming Theatre was open into the 1970’s. Both buildings were torn down after the 2001 flood.

This item from the March 23, 1918, issue of The American Contractor could be about the Wyoming Theatre:

The NRHP Registration Form for the Mullens Historic District, of which the Wyoming Theatre is a contributing structure, says that the Wyoming was built in 1922, but Exhibitors Trade Review announced the opening of the house in the spring of 1919. Possibly something happened to the original theater and it was replaced in 1922, or maybe the Registration Form is simply mistaken.

The March 8, 1919, issue of Exhibitor’s Trade Review had this item about the Wyoming Theatre:

“A splendid moving picture house and a new hotel, both named the Wyoming, have been opened in Mullens. W. Va., by Mr. Sizemore. The theatre charges 20 cents admission and is putting on some of the best features.”The first name of architect A. F. Wysong was Alphonso. Wysong had offices in Princeton and Bluefield, and designed a number of significant buildings in the region, but so far the Wyoming is the only movie theater I’ve found among his works. He did design the Municipal Auditorium at Charleston, West Virginia, built in 1939 and now listed on the NRHP.