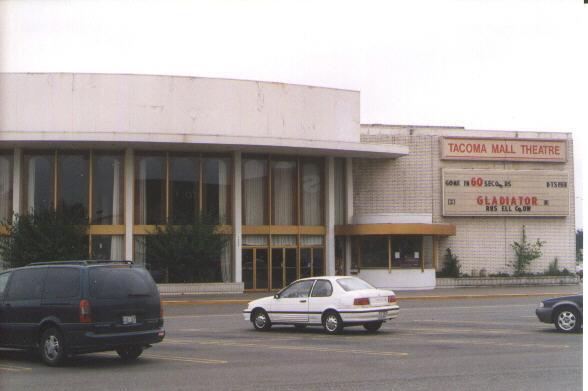 This former single-screen cinema opened May 16, 1968 with Spencer Tracy in “Guess Who’s Coming to Dinner?”. Built at a cost of $1 million it was the first hard-top built in 40 years when it opened.

The News-Tribune wrote at the time that the Tacoma was ‘Grauman’s, the Cathay Circle, Hollywood Boulevard and London Airport all wrapped into one and brought up to date.’

On November 27, 1974, it was split into a duplex and renamed the Tacoma Mall Twins creating a 700-seat and a 400-seat theater out of the large 1,200-seat auditorium. Over the years, the construction of multiplexes and megaplexes damaged the vitality of the theater.

Ralph Daniel…MSC77…polyparkie…The opening was on the date cited in the overview…with Guess Who’s Coming to Dinner? 2001 played a year and half later (for 12 weeks) followed by Zebra, Java and in 71, Norway…the last 4 “Cinerama” pictures ever.

patryan6019: Were the Tacoma Mall engagements of the “last 4 ‘Cinerama’ pictures” advertised/promoted as being “in Cinerama”? Even Song of Norway?

Does anyone know a Tacoma resident who can look up old newspaper records to see what the ads said?

This site has many, many newspapers online:wwwfultonhistory/fultonhtml.org

What were the playdates of the Tacoma Mall’s run of “Song of Norway”?

Sterling Recreation Organization bought the Tacoma Mall Theatre in July, 1972. Boxoffice of December 2, 1974 reported that SRO had held the grand opening of the remodeled Tacoma Mall Twin on November 27.

This was opened by United Theatres (Pacific Theatres) on May 16th, 1968 with the same design as the Pacific Lakewood Center near Long Beach, California. Grand opening ads posted. 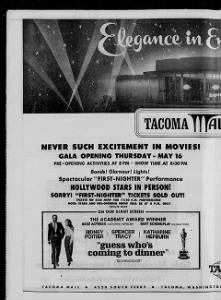 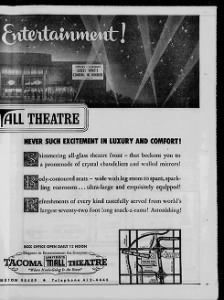 None of the movies were promoted as “in Cinerama”