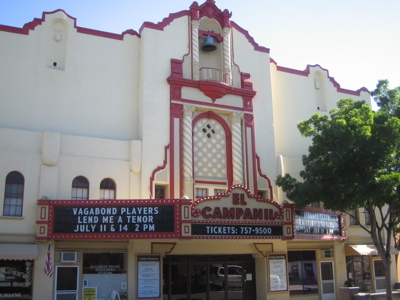 When it opened in 1928, the El Campanil Theatre served as a venue for both vaudeville and movies. It was built at a cost of $500,000. Among the performers to appear at the theater were Roy Rogers, Mary Pickford, Sally Rand, and Donald O'Connor.

Its Spanish Colonial/Spanish Gothic style facade was unusual because as the theater’s name suggests, it had three archways, each with a bell inside it, with the largest arch and bell being in the middle over the main entrance, three stories up. The auditorium still has its original ornate painting and Moorish chandeliers and wall sconces. The dressing rooms are adorned with hundreds of autographs that date back to the theater’s opening.

After decades serving as a movie house, the Campanil closed, but later was reopened, serving as a church. The theater was purchased by a non-profit foundation in 2003.

The team responsible for renovating and preserving the theatre deserves a huge applause. Not only did we enjoy the Debbie Reynolds show held there, but the theatre was as lovely and charming as my mother used to describe, as it was THEE place to go when she was a young girl. Thank you so much for allowing us “youngsters” to marvel in some of Antioch’s great history.

A Kimball organ Size 2/12 was installed in the Belmont Theater in 1916.

I am not sure what ‘cosmic’ is talking about above. The El Campanile had a 2 manual 6 rank style 165 Wurlitzer that was installed when the theatre opened.

After leaving the El Camp,the organ went to an Oakland area nightclub known as 615 Club where it was played for dancing by
the late Dave Quinlan.

When the 615 was closed, the organ was moved to Rudy’s Supper Club in Vallejo where it contineud to play for many years, again played by Dave Quinlan.

Due to the vintage of the organ (1928), the organ was equipped with “black cap” [electro] magnets to actuate the switching and pipe valves. These magnets are often prone to failure, but are easy to replace.

Sadly, an electronic organ sales effort got the Supper Club to dump the pipe organ because it “was in bad shape” and the club hauled in some sort of electronic organ and sold the pipe organ. The pipe organ was broken up for parts and no longer exists. Some parts were used in the composite Wurlitzer in the Fox Theatre in Hanford, CA (which is now, misguidedly, about to be replaced with another composite organ with none of the quality of the organ presently installed.)

i been to this theater twice to see 2 really good shows in late 2007 i seen a mexican folk band from richmond ca called Los Cenzontles and they rocked the house and in march of 2008 i seen another very good band from los angeles called mariachi divas they played to a sold out Audience and also rocked the crown i had such a good time .
but as a theater it has that classic charm i really enjoyed this place i’m glad this cinema gem was restored …..

When the theatre was “rehabilitated” in 2004, the stage was extended, new lighting, sound, marquee and 700 new (vintage style) seats were installed.
Visit the website at: www.elcampaniltheatre.com

There are five photos of this theater on this webpage; clicking on them will enlarge the thumbnails.