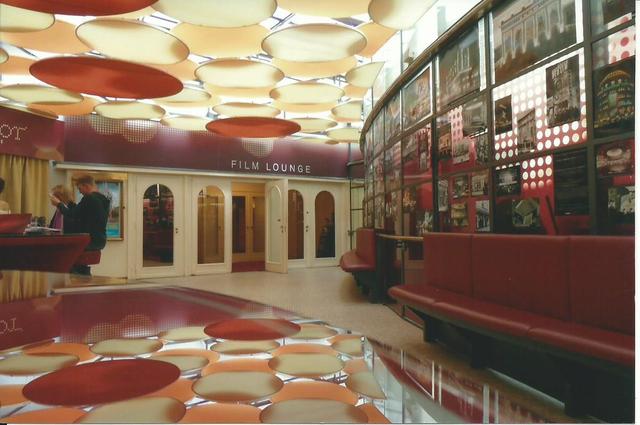 A beautiful and uniquely decorated cinema, it was developed in several stages after a modest start in 1948 in the former hall of a restaurant.

In 2008 it was taken over by Hans-Joachim Flebbe and has been splendidly restored and re-named Astor Film Lounge, after the nearby now closed Astor Cinema.

It opened in 1948 as the KiKi;an abbreviation of Kino im Kindl. This name comes from the orginal use of the building the Kindl Brau-Gaststatte(Kindle Beer Restaurant). The original architect was E.J. Kuhnert who created a cinema that had 315 seats on one floor.

The small entrance on the street facade has a narrow passageway containing a pay-box;this leads to the main cinema entrance set behind the buildings on the main K'damm street. In 1951 the foyer was given a new look with a glass ceiling illuminated from above, and the architect Gerhard Fritsche gave the cinema auditorium his own artistic style with sweeping lines and stepped coves in the ceiling which contain concealed lighting. The seating capacity was increased to 650.

In 1956 the cinema was taken over by Ufa and re-named first Pavillion and later Film-Palast. It is a Listed building and has facilities to screen 16mm, 35mm and 70mm film with a sound system that boasts Dolby SR, DTS and is THX certified.

A lovely auditorium photo on the official website of the Film Palast. http://www.filmpalast-berlin.de/

More infos and photographs on this theater (and many others) can be found on the German language only Berlin Movie Theater Guide – www.kinokompendium.de: Filmpalast Berlin

The photographs I uploaded today were taken in September 2013.

Exterior and lobby pix from July 2013.