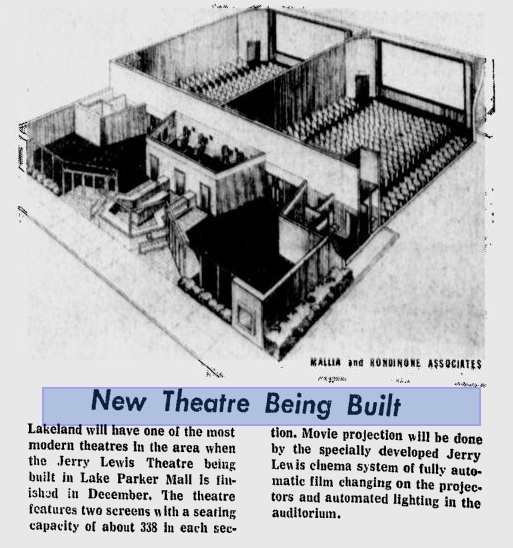 Located in the old Lakeland Mall, the Jerry Lewis Twin Cinema opened in 1972. Later re-named Lakeland Mall I & II, it closed in 1983 and was purchased by new owners. The mall itself has closed since then and the First Baptist Church at the Mall operates from the building.

I wonder if this JLC twin was laid out like the one I worked at back in the mid to late 70’s. One theatre was blue, the other red, with the concession stand in the middle of the lobby, prohibiting people from crossing over.

Movie534, this theater was designed the same way as the one you worked at. Blue on one side and the other red, with the concession stand in the middle. The mall was turned into the “First Baptist Church at the Mall”. The theater still exists but it is used only for church functions. The theater is located at the back entrance of the former mall.

Jerry Lewis Cinemas were part of a chain of franchised independent theater owners. The Chain was controlled by Network Cinema Corp. By 1980, the chain was completely defunct, with both Jerry Lewis and the National Cinema Corporation filing for bankruptcy.

in Jerry Lewis'book,“DEAN and ME”,Jerry talks about his failed cinemas,one of the few times I recall him ever writing about them.