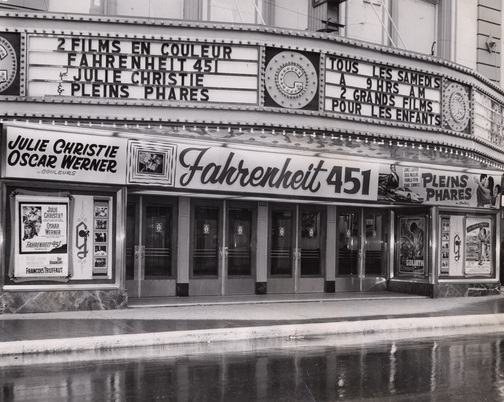 The Granada Theatre was opened on 28th March 1930 with Janet Gaynor in “Sunny Side Up”. It was built for the United Amusement Theatres chain. Designed by architect Emmanuel Arthur Doucet with the splendid Atmospheric style interior carried out by interior designed Emmanuel Briffa. Seating was provided on one level in a stadium plan, with a raised section at the rear.

The Granada Theatre had a double bill policy in English until the early-1960’s and then French after. It closed as a movie theatre in 1976.

It was purchased by a Montreal theatre company Nouvelle Compagnie Theatrale who did some alterations when they enlarged the stage and removed the original proscenium arch, replacing it with a much plainer one. It reopened as the Theatre Denise-Pelletier on 14th October 1977.

The Canadian Register of Historic Places identifies the architect of the Granada Theatre in Montreal as D. J. Crighton, as does the caption of a photo of the Granada’s lobby in the October 25, 1930, issue of Exhibitors Herald-World.