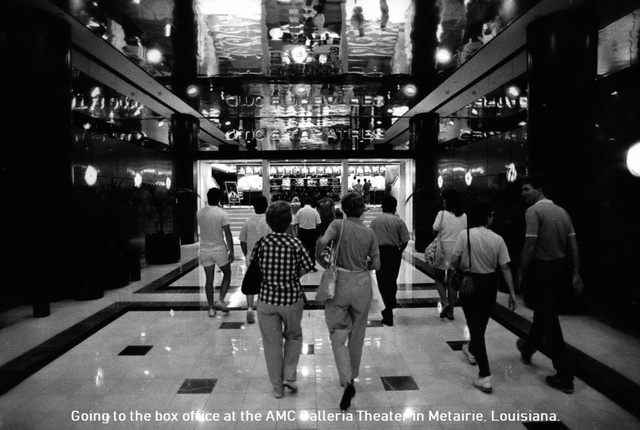 Located in Metairie’s gorgeous skyscraper, the AMC Galleria 8 was a favorite destination for Jefferson Parish locals who enjoyed the cinema from its opening on June 3, 1987, to its closing in the late-1990’s.

I went there once, sometime in the early 1990s; yes, the highrise building it was in was (and is) rather striking, but beyond that, it was rather unremarkable as a cinema, a typical AMC multiplex of the late 1980s. The building is right on I-10, not far from the airport, in a big cluster of chain restaurants and hotels. There was not all much in the building other than the theater in terms of restaurants, stores, and other retail, and to call the shopping area a galleria struck me as rather an exaggeration.

Was on the 7th floor.

June 3rd, 1987 grand opening ad has been uploaded. It very rare to have an cinema on an upper floor of an office building. The only other example is the Capitol 3 in Yellowknife, NWT. It closed in 2002 when AMC bought out the Gulf States Palaces cinemas.

The first six floors are the parking garage.

Originally it was suppose to bigger with five towers and a Embassy Suites Hotel there back in 1986 however 30 years I when there to see both Beetlejuice and Poltergeist III respectively. It was a nice theatre back then .

Correction I was referring to the year 1988.

I loved going to this theater. I believe it took up the 7 and 8 floors. It was a large theater for its time. Wonderful memories.