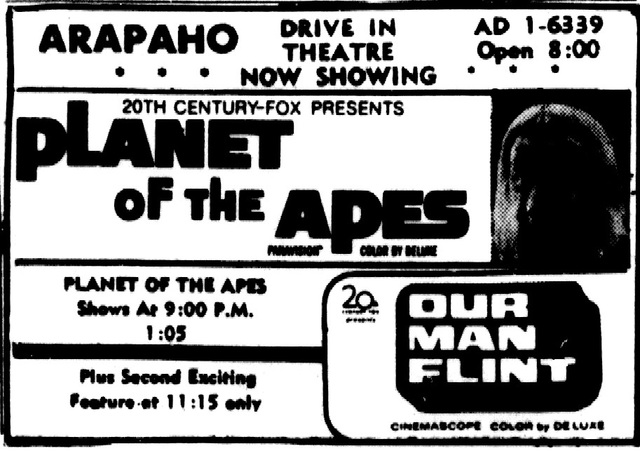 Thanks matt54,the point i was making that address,s do change sometimes what was the correct address 35 to 40 years ago might not even be the same today,that happens.I am well aware of the contributions of many people on this site.

On March 21, 1956, Mr. and Mrs. J.B. Roberts opened the Arapaho Road Drive-In. The Roberts had owned the Ritz since 1942 and expanded to the Arapaho with Desi and Lucy’s feature, “Forever Darling.” Trouble came early when Mrs. Roberts reported and testified about spikes were thrown maliciously to damage tires at her drive-in. The Roberts decided against hiring a union projectionist and spikes were thrown in 1957 at both the Arapaho and the Linda Kay Drive-In, which also didn’t hire a union projectionist. The perpetrators were jailed but the sentence was reduced when the overall tire damage was estimated at just $75. The theater was home to an annual Easter sunrise service each year through 1971 which appears to be the drive-in’s last year.

The drive-in’s number was up when the land owners decided to request and received a zoning change to allow a multiple residence dwelling on the site of the drive-in. The Arapaho would be demolished and the site would house a senior citizen complex in the future. It’s also possible that the Roberts had a 15-year lease on the drive-in property since it times out to 15 years of bookings.

Great childhood memories here. ..where I worked from age 15 to almost 18…it was owned by the Garcia-Lence family..Etta and Ramon….It was here I learned to be a projectionist…and had to stand on a wooden coke box to reach the change over levers…many stories rushing through my mind…these folks had the lease on both properties at the in when the multi screens came to town…I had the lease on the Ritz and changed it to The HOLIDAY. .in 1968..omg…more later

In 1972, when I was nine years old, my family moved to a house located one block from this abandoned movie theater. The site was all overgrown with weeds but the screen was still standing, and my brothers and I would play there for hours and go “exploring”. We went inside the screen structure, which was a tall narrow building. It was really spooky and dusty, and there were rats running around. Inside there was a ladder where you would climb up to a catwalk, and along the catwalk were several shelves with boxes where all the marquee letters were still stored. There was a door at the end of the catwalk where you could walk out onto the awning and place the letters on the marquee. We ended up moving across town in 1973, but I think the abandoned structure stood for several more years.

Very nice story billfig. Yes, I find the inside of those old screen towers creepy too, even at my age of 43 lol. I went inside a couple over the years and there are usually large rats and birds nesting inside. It is cool sometimes to find old posters though!

Is anyone certain of the official name of this drive-in, whether it was “Arapaho Drive-In Theatre” or “Arapaho Road Drive-In Theatre”? I’ve seen both in print (see 1963 Dallas News Ad I just posted), but noticed no “Rd” or “Road” on the photo of the screen tower.

Boxoffice, Oct. 19, 1959: “Ramon Lence (is) the new owner of the Arapaho Drive-In … His parents are assisting him with the operation of the drive-in. Free prizes were offered every night during his first week at the airer.”