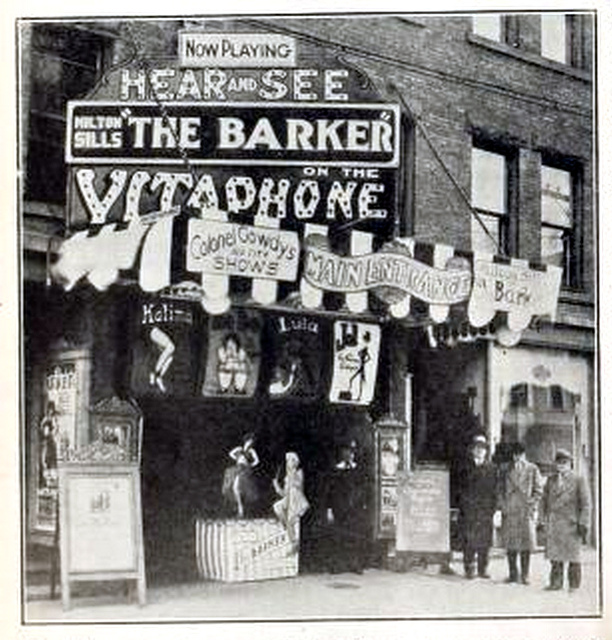 The Oneonta Theatre opened as a single auditorium theater in 1897, and is on the National and State Register of Historic Places. By 1941 it was operated by the Schine Circuit. In the early 2000’s it returned to its roots to accomodate live performances after being sold to former employee Terry Mattison.

Mattison, who has worked at the theater since 1974, converted the twinned 105-year-old movie house into a live theater venue. He also made other modifications including repairing the theater’s roof and other touch-ups. It was closed in 2016.

Nice article good luck to them.

Photos taken November 15, 2010 at the Oneonta Theater. It was great to meet Tom the owner and supporters Julie and Patrice.

Although it has been much remodeled through the years, the Orpheum Theatre in Boston dates from 1852. It is listed here on CT.

In Troy NY, we have the Troy Music Hall which opened in 1875. It has never been a motion picture theatre so it is not listed on this site. It has spectacular acoustics and has only featured musical performances.

Near here is also the Cohoes Music Hall, which opened in 1874. Although it is restored and open today, it was closed for 69 years (1905-1974). It is used for live theatre productions today.

Hey AlbanyGregg – Theatre Historical Society is planning their Conclave for the Albany/Berkshire area in 2013 – sounds like you would have a LOT of ideas for us! Email me at if you’d like to start a dialog on the “don’t miss” locations in your region! (Troy & Cohoes are on the “must see” list along with, obviously, the Palace)

The Oneonta Theatre, aka The Oneonta 1 & 2, was actually my least favorite of the three Oneonta movie joints available to me growing up. The main auditorium was really nice, with beautiful vaudevillian ornamentation and a huge screen. A little run-down, it had a shabby retro-chic that I admired. But the acoustics of the main room were a huge problem. If you sat under the balcony, the sound was super-compressed, muffled, and difficult to hear. If you sat closer to the screen, the open-air acoustics absorbed most of the dialogue. Sound in the balcony (which was rarely open during my time there) wasn’t much better. That room was great for live theater (The Orpheus troupe performed there often) but was pretty dismal for films.

The second room was built off the balcony and was also pretty pathetic. Super-tiny, it held only 200 people and had two huge support pillars jutting up through the floor into the ceiling, obscuring the view if you didn’t sit dead center. The sound was fine, however, and it was in this room that I first saw “Pulp Fiction,” which was a minor epiphany at the time.

The 1 & 2 stopped showing first-run movies sometime around 2006 and the building has since been completely restored and repurposed as a live event space hosting minor circuit touring bands. I am glad it was saved and restored and think it will live a better life as a concert hall than it did as a movie theater.

The theatre is closing on January 1.

It’s open again and hosting concerts. There is a great collection of photos of the current day theatre at their website under “Then & Now”.