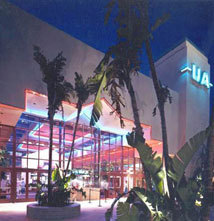 Due to lease/parking issues, the theatre could only offer matinees on weekends. In small auditorium was immovable masking (as if up and down weren’t bad enough). Scope and flat were played on same-size screen and in the same aspect ratio. The first manager was Lou Buckman.

In case you missed the UA, operated by United Artists.

This is now a 24 hour fitness. It was your typical UA design of the late 80’s where you had all 8 theater entrances in the lobby. Similar design to the UA Horton Plaza 7.

I went to this theater many times while living in the Brea/Fullerton area (1991-1996) and actually liked it a lot. It was way better than the 4 screener in Brea Mall, which was a total dump, and the Brea Plaza 5, which was OK, but just wasn’t as nice or comfortable. From what I have read from other sources, this theater was stuck with a bad lease, which prevented them from showing matinees, or something like that. Combine that with Edwards opening a 10-screen and 12-screen theater in the new Downtown Brea, and that should explain why this place eventually closed.

This is the theatre I got my start at as a usher. Got me into a career I stuck with for 18 years. Great memories, like opening weekend of ID4.
Auditoriums 7 and 8 were THX sertified for a time. Always a great place on the weekends. The lease killed this place when Edwards built a theatre down the street. The lease said the theatre couldn’t open mid week becuase it shared a parking structer with the office building next store. Most memerable time for me was as a 17 year old kid getting threatened by a customer because his wife thought I was rude to her. It was my second day.