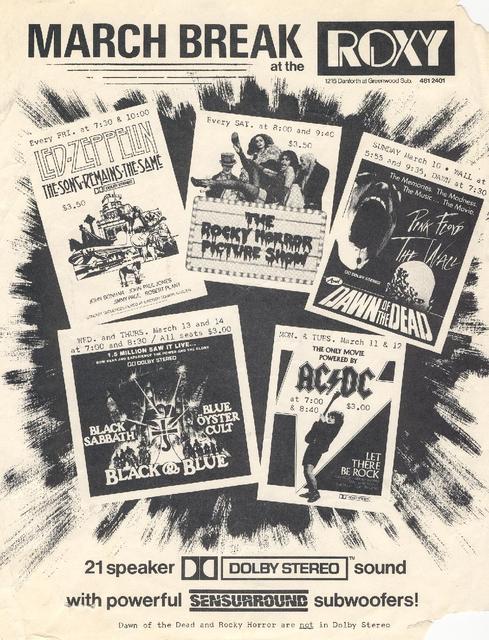 The Allenby Theatre opened in 1940. The auditorium was demolished in Fall of 2009, with only the front section of the building remaining.

Ah, the Roxy….I had a lot of history with this one. John Wayne and other western double bills with my dad in the late ‘60s and early '70s; cult film double/triple bills on Sunday afternoons (my favorite of these being 'The Kids Are Alright,’ (cranked WAAAAy up) ‘Rock 'n’ Roll High School,‘ and 'The Magic Christian’) in the late ‘70s and early '80s. I also remember a double bill of 'Raging Bull’ and ‘Taxi Driver’ that had me so pumped with venom I was ready to murder the first passerby when I emerged at midnight…and on and on.

There is no way sitting in a bland box with stadium seating and great sound and picture can compare to the experience of reps….cinemas have lost their soul.

Sadly, the status needs to be changed to ‘CLOSED/DEMOLISHED;’ it was bulldozed in the autumn of ‘09.

There is a picture of the Roxy’s lobby from the 1940s on this blog page (scroll down to see it): View link

Swung by the Roxy site late last week and the conversion of it into an esso station is almost complete. They did a great job with the facing which was the part of the building that had been designated as a historical site and putting the marquee up with the original name of Allenby on it. Would have been even better though if they endorsed it as completely heritage and reopened as a rep house but cest la vie……

Here’s a great shot of the Allenby’s lobby from from 1936, showing Boris Karloff in “The Walking Dead.”

in the early 80’s i went there every friday night to watch Led Zeppelin’s “The song remains the same” i think saturday night was pink floyd the wall, sunday was, rocky horror picture show, monday was “black and Blue (sabbath and b.o.c. thursday was Spinal tap. my days may be mixed up but let me tell you… i took the don mills bus from york mills… to pape station then got on subway to greenwood station. before i could exit the station i had already encountered 3-5 lsd dealers. i was 15 at the time and boy oh boy that place was a rockers paradise. they even let everyone smoke in there. I will never forget the roxy. im 43 now and i still havent found anything that even remotely compares to the fun i had there. all hail the ROXY

During the time that I ran this theatre (mid 70’s to mid 80’s) the Roxy had approximately 680 seats. We had to reduce the seating capacity somewhat when we renovated the auditorium to make room for a much larger screen.

How sad that it’s a Tim Horton’s now.

As far as I understand it, the Allenby/Roxy Theatre has been retooled as an Tim Horton’s and an extension of ESSO as of 2014.

The “Demolished” section should be removed.

The Roxy’s auditorium was definitely demolished, only the lobby area and the restored exterior remain.

Full chronological history in below link.