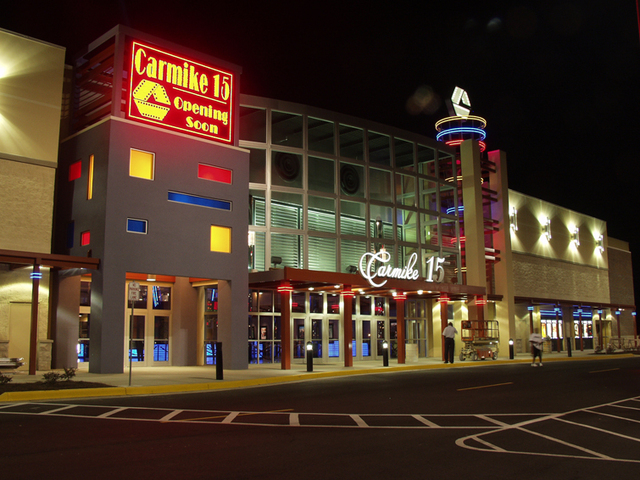 Carmike Cinemas has been the leader in Digital Projection and 3D technology since 2006 and is the only national circuit exclusively using DIGITAL Projection in all its theatres showing the newest Hollywood movie releases. The IMAX screen was installed on December 13, 2013. In April 2017 it was taken over by AMC,

The auditorium design is boring and bland, wheres the creativity, the showmanship! Must have been computer generated.

The Carmike 15 in Columbus was designed by the Chattanooga architectural firm Artech Design. Photos can be seen in the entertainment projects portfolio at their web site (click on the fourth thumbnail photo down in the right column of the page.) The text says that the project was a new prototype for the Carmike chain, and that the design and construction were both fast-tracked to meet a tight deadline. That might account for the under-designed look Joel Weide found displeasing.

They always play the original Halloween every year

First IMAX built in an Carmike opened in 2013.

@rayman29, do you know if the signage outside the theater will reflect AMC?

how about reserved seating?

Yes the signage says AMC now. You can buy your tickets in advance.