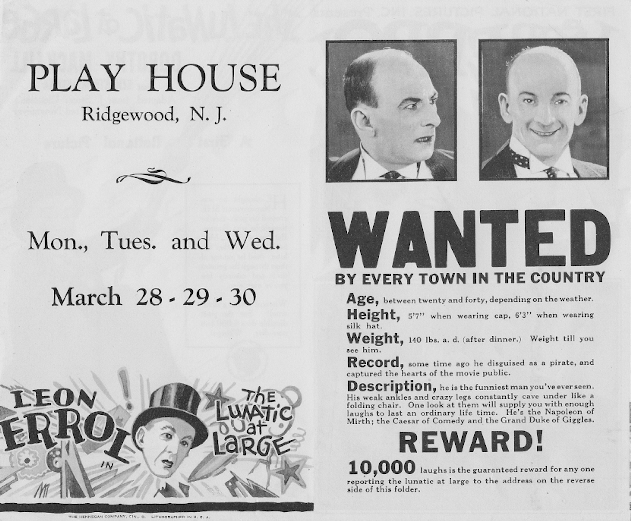 The Play House Theater opened on November 22, 1913. The theater was equipped for both movies and live performances, but on opening it had only a piano for music. An organ was installed later. The parquet seated 800, and a balcony accommodated an additional 200 patrons. The Play House Theater originally presented feature films of the Famous Players Company, at prices of from ten to twenty cents.

Built by developer Walter W. Wilsey, the theater was part of an ensemble of structures which all featured similar architectural elements, including tiled pent roofs supported by brackets. The facade of the Play House Theater was simple, mostly stucco with a bit of tile trim, but the lobby and auditorium, while still restrained, were a bit more ornate.

Although the auditorium and stage house have been converted for office and retail use, the facade of the building, still sporting the name ‘The Play House’ below its pent roof, is largely unchanged in appearance from the time of its opening in 1913.

1928 postmark.
Thanks for posting this. I wasn’t sure that it was a movie theater. Not listed in the 1944 Film Daily Yearbook.

On May 26, 1913, the Village Commissioners, through the Building Inspector, gave the Ridgewood Play House Company permission to erect a building on Wilsey Square between the Van Orden Garage and the Osman Building. The directors of the company where: Walter W. Wilsey, President; Thomas Nichols, of Nutley, Vice-President, A.B. Van Liew and A.W. Fish of Bloomfield, and Howard Peck of East Orange, Directors. W.W. Young, formerly of Bloomfield was Resident Manager and under his direction the company furnished a daily program of high-class moving pictures, except when the building was used as a place for events connected with the social and civic activities of the community.

The land and the building which was of fireproof construction cost the company between $40,000 and $50,000 and was built by Ridgewood contractors. The mason wook was done by Thomas Vanderbeck, carpenter work by J.L. Brown, the plumbing and heating by W.H. Moore, and the painting and decorating by J. Uhlman. Bigelow and Maxham provided the furnishings.

On November 21st 1913, in the presence of a larger assemblage of citizens than had ever before gathered in an auditorium in the Village, the building was formally opened. The program included an address by His Honor, Mayor Daniel A. Garber, a response by Walter W. Wilsey, the father of the project; the presentation of Pinero’s comedy in four acts “Trelawawney of the Wells”. by Miss Gelbart and her associates, all Ridgewood young people; and the reading of a “Dedication Poem” written by Roland Clinton.

Anyone have more info and more photos?

The November, 1915, issue of The Architectural Record ran an article called “Planning the Moving Picture Theatre” which inlcuded the following illustrations featuring the Play House:

A sectional drawing through the length of the house

The digitized book is available from Google Books, and includes photos and drawings of several other theaters of the period.

During the latter part of 1916 the American Master Organ Company of Paterson, New Jersey (only 6 miles away) installed a $5,000 Orchestral Pipe Organ to accompany the silent movies. Does anyone know what happened to the organ?

I have walked and driven by this structure countless times over the years and I never noticed the words “The Play House” on it. This is what makes this site so good. Thanks for sharing this.

The December 27, 1913, issue of The Moving Picture World described the recently opened Play House this way:

“Ever since the Play House, Ridgewood, N. J., opened on November 22, the management has been playing to capacity business. The structure, which is of concrete construction, measures 52 feet by 154 feet, and has 800 seats on the parquet floor and 200 in the balcony. The seats were bought of the Andrews Seating Company, and the stage scenery and curtain were furnished by the Lee Lash Studios. The interior decorative scheme is ivory, gold and brown ornamental plaster. In the operating room there are two Simplex machines and a Hallberg economizer; the projection machines are fitted with Gundlach-Manhattan lenses. The length of the throw is 127 feet. The indirect lighting system is used throughout the house. The ventilation system can supply thirty cubic feet of air per minute. The screen is located at the back of the stage and is framed in black. The admission prices are 10 and 15 cents, except when specials are run when the price is raised to 15 and 20 cents. The General Film Service is used with features from the Famous Players Company. A piano is the only musical instrument in the house. The lobby is of tile and marble. William W. Young is the resident manager. The theater is owned by the Ridgewood Play House Company, of which Walter W. Wilsey is president; Thomas Nicholas, of Nutley, vice-president, and A. N. Van Liew, of Newark, Secretary and treasurer. The board of directors consists of Howard Peck, of South Orange, and Albert W. Fish, Bloomfield.”