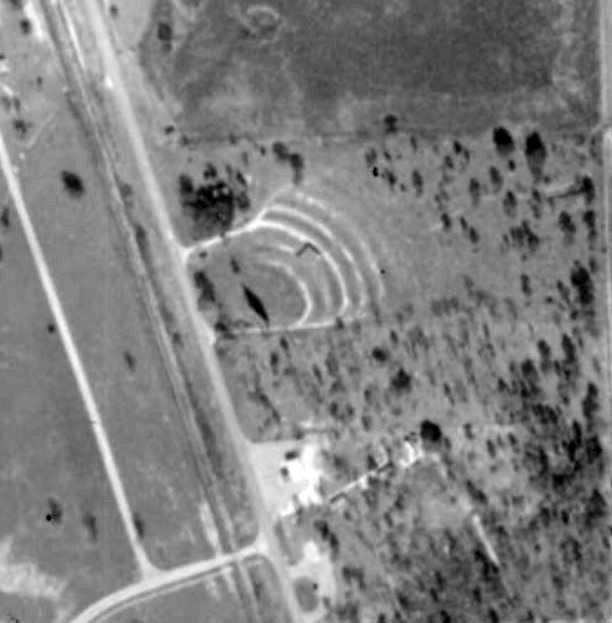 Located along US 41 about midway between the two Citrus County communities of Hernando and Inverness, the Citrus Drive-In was likely the only drive-in operating in the whole county.

A letter from the local historical society stated that the theater was located on the left side of 41 when heading south from Hernando, just past the Kwik King gas station (which is at 1211 N. Florida Avenue). This suggests that the theater was located on the land currently occupied by a U-Haul station or a neighboring parcel which is now some sort of tractor trailer lot.

The theater does not appear on late-1970’s/early-1980s USGS topographic maps, which gives at least some sort of timeframe for how long it has been gone.

Could use an exact address, more info and photos.

The above address will map accurately to the location of the drive-in, which is vaguely visible using Google Earth historic aerial imagery. You can make out the shape of the parking area, and the entrance/exit driveways are easy to spot.

The earliest aerial photos available for this location are from 1977, and the resolution of the photos was too low to provide conclusive evidence for the drive-in, but the location matches up with exactly with description offered by the local historian below the theatre heading.

The mapping will work with either Inverness or Hernando, as long as the 3442 zip code is used. The drive-in was about midway between both towns.

It did park 150 cars and in 1956 it was owned by A.B.C. Theatres. I don’t think they were the same ABC theatres I worked,we were with the Network.

I am the current resident of this property. I own the business, Excel Automotive on this premises. I too am looking to find out about this “said” drive-in, but have found absolutely nothing. I can see remnants of a where a few buildings were erect and a really old light pole buried in the woods. But otherwise nothing else on the layout of the drive-in. Images, blueprints or photo’s would be nice to see.

excelautomotive1155..here is an aerial from 1960. It was located were your business is at. It looks like one of your smaller buildings could have been the projection booth and concession stand at one time. I just guessing by looking at the 1960 aerial and Goggle street view.

Attempting to answer Bob Jensen’s question: A 1951 aerial view of the site shows an empty field.

The Citrus’s first appearance in the Motion Picture Almanac was the 1953-54 edition, where it was listed as capacity 150, owned by A.B.C. Theatres.

Motion Picture Daily reported on May 12, 1955 that J. Williams Mullins had purchased the Citrus from J. B. Wagner. The 1955-56 Theatre Catalog listed the owner as J.W. Mullins (and capacity 200), but the MPA didn’t notice any ownership change until 1960 when it said it was Gordon Peck.

The Citrus’s final appearance in the MPA drive-in list was the 1965 edition.