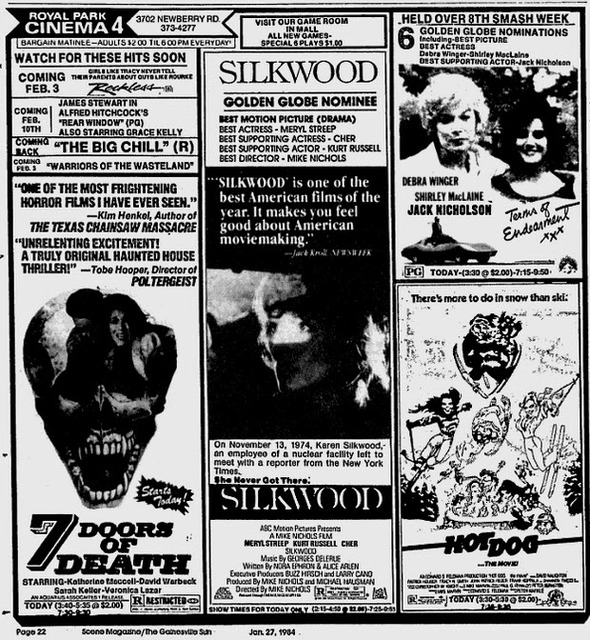 This four screen theatre was located on Newberry Road, Gainesville, Florida. Opened in the early-1970’s as a twin cinema. It was expanded to four screens by 1980. It was closed August 16, 1998.

In the mid-to-late 1970s this theater had three screens, so I do not see how it could have expanded from two to four screens as claimed.

I will have to check the Gainesville Paper.Way cinemas would piggy back films it is an easy mistake to make.

June 2 1981 ROYAL PARK CINEMA 4…
Playing on four screens.8th week “EXCALIBUR”.“BUSTIN'LOOSE”, “FORE SEASONS” and LEGEND OF THE LONE RANGER".This from the Gainesville paper.Micheal, i guess it expanded.I don’t live there so i don’t know any more about it.But it was Four Screens.

Mike, I think you misunderstood what I wrote (or perhaps I wasn’t clear), so let’s try again: Yes, the theater expanded to four screens (sometime between 1977 and 1981), but the expansion to four screens was from three screens (not from two screens as implied in the intro write-up).

I was not disputing your claim that the theater, in the ‘80s, was a four-screener; I was simply pointing out that, during part of the 1970s, the place operated as a three-screener. (See my “Jaws” article for a reference to it being a three-screener.)

As such, I think “Royal Park Cinema 3” ought to be included as an alternate name at the top of the page.

I need to correct myself. It turns out this place never was a three-screener as I previously indicated. (I had been misled by some deceptive newspaper advertisements.)

By 1975 the Royal Park had four screens. Prior to that it was a twin.

The Gainesville Sun says that this theater’s final day of operation was August 16th of 1998. And apparently, Halloween: H20 was the last movie they ever showed.