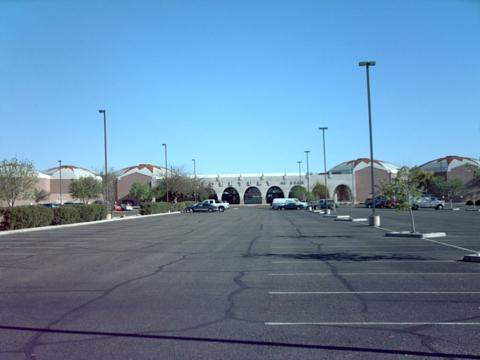 Built on the site of the Tucson 5 Drive-In, this theater was opened by Syufy Enterprises (later Century Theatres) chain on October 6, 1989 with 12 screens, and had expanded to include 16 screens August 12, 1994. Some of the screening rooms are domed, which are reminiscent of the large Cinedome theaters that Syufy built at one time especially in California. It was acquired by Cinemark in 2006.

In 2010, it was acquired by an investment group and was closed permanently in 2011, to be used for non-theatrical purposes.

Two pictures of the Century Park 16 can be seen here: View link

The architect for both the original 12-screen Century Park Cinemas and the later expansion to 16 screens was Vincent G. Raney, architect for Syufy/Century Theatres until his retirement in 1996. Two photos from the 16-screen expansion can be seen on this page of the web site of BFL Construction.

This opened on October 6th, 1989 with 12 screens. The grand opening ad can be found in the photo section. An XD screen was added in 2010.

Here’s the link to a new historical article about large format and roadshow presentations at Century Park and other Tucson cinemas.