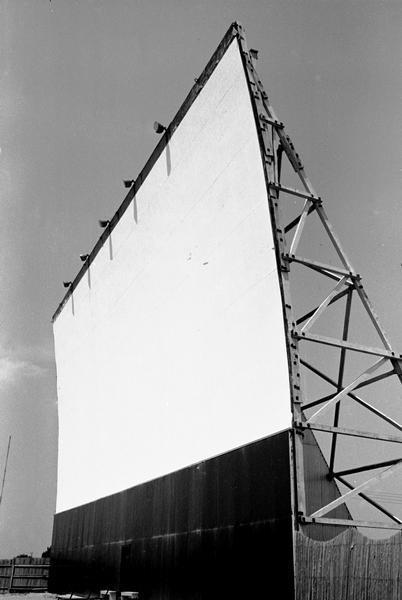 The Starlite Drive-In was located on the East Side of Green Bay on E. Mason Street at Abrams Street. The drive-in was opened July 2, 1949 with Yvonne De Carlo in “River Lady”. It had a car capacity listed at 550. Initially it was operated by Prudential followed by United Artists and finally Rogers Cinemas.

The Starlite Drive-In was closed on September 9, 1982 and has since been demolished with no traces of the theatre left.

Some pictures of the Starlite as it was in 1959 from the Wisconsin Historical Society:

It was owned by Badger Outdoor Theatre Company in 1956.

Correction… The Starlite Outdoor was located on Abrams Street , Not Cass street & Mason Street. This theater was located 3 blocks away from my home when I was growing up in the 1970’s and 1980’s. I watched the bolt of lighting Cut the screen in half then the wind blew one half of the screen down..on the night it closed forever… We used to sneak in during the day and turn up the volume on the speakers then watch the film at night….Growing up in the 1970’s was fun…

This opened on July 2nd, 1949. Its grand opening ad can be found in the photo section. It was owned by Prudential Management Corp. (from Long Island NY), United Artists and Rogers Cinemas, Inc.

A closer address (at least for Google) is 810 Abrams Street, Green Bay, WI. The entrance was off Victoria Street and was about a block long.

Today, the property is a housing edition with no trace of the drive-in remaining. http://tinyurl.com/zz2hwc8

Final night of operation was September 9, 1982 with “Raiders Of The Lost Ark” and “The Beastmaster”. Although the ad from the day’s paper indicated “we hope to see you next year”, the June 23, 1983 edition of The Green Bay Press-Gazette announced that the drive-in would not reopen.

The address above is incorrect. A more accurate address for this theater is 1676 E Mason St, Green Bay, WI 54302. This points next to the entrance road which is now Victoria St. Victoria did not exist when this theater opened. Abrams is next to the screen but there was no entrance or exit there.

An article in the Sept. 3, 1949 issue of BoxOffice provides different information, perhaps reflecting the difference between a preview (soft) opening and a grand opening:

GREEN BAY, WIS. – The new Starlite Outdoor Theatre was opened here with the officials of the county board, Mayor Dominic Olejniczak, association of commerce officials and others attending the ceremony.

The theatre will accommodate 800 cars. The screen tower is 73 feet high, with a 53-foot high neon sign back of it. Robert LeCoque, manager, says that width of the entrances was increased from 40 to 90 feet to avoid traffic congestion. Near the entrance, a picket fence was erected to designate the entrance point on the highway.

A feature of the drive-in is the pony ride to keep kids occupied. Opening show was “Mr. Peabody and the Mermaid,” two color cartoons, a short feature and newsreel. Two shows are given each night.