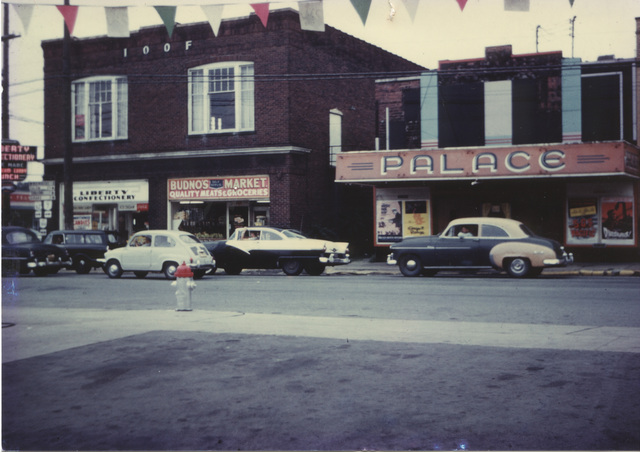 Peter Wellman, owner of a chain of local theaters owned the Palace in Hubbard,along with theaters in Youngstown, Niles, Girard and Campbell, Ohio.

My father ran the Palace theater in early 1970’s. He rented the place off of a fellow named Don, who also worked as the projectionist. I was just a little kid, but i remember spending my Saturdays there. We showed Godzilla movies, Disney movies, lots of classic stuff. Very few if any new releases. Great Memories. I am looking for any photos of the theater if anyone has any. Bryan Jones.

I went to Palace with my brothers and sister in the ‘50s and early sixties. I had gotten to know Mr. and Mrs. Hegfield, who originally worked for Wellman then bought it and operated it until they had to sell it for family related problems. John would take tickets and work the concession stand while his wife sold tickets. It cost 25 cents for kids and 50 for adults, always a double bill. Their son Don was the projectionist and was very generous in showing me the equipment and allowing to hang around. There was small unused balcony by the projection booth with an old couch and I sometimes would watch from there. The projectors were Motiographs with barrel shutters which gave a very fluid look to the pictures. The sound was RCA Photophone. The projector mounts still had the record players used for the early Vitaphone sound pictures. I spent a lot of happy hours there. It pains me to see a little park where the Palace used to be.

I have a few pictures I can post soon. I also was given a reel of film by John Hegfield, and he told me I’d know what to do with it someday. I used to see them run it sometimes between films. The reel was a 1936 advertising film for local businesses, and included several long takes of the kids at the Hubbard Schools. The reel also had the “previews” used before the trailers. Awhile back my sister and I transferred the old nitrate to an internegative and a video for safety sake. The only thing that had kept it from deteriorating was it was covered in projector oil. We tried to find a local historical society to take it, but no one seemed interested.

In my above comments, I couldn’t remember Mrs. Hegfield’s first name. It was Alice.

The map is wrong however. I e-mailed the correct Google map location. It was on Liberty, just one door from Main Street. Did anyone salvage the projectors?

Can anyone help me, I stumbled across an ad in the theater page of the Vindicator for the Outdoor Auto Theater – a Drive In that was located on Rt. 62, Youngstown Hubbard Road. Can anyone tell me about this theater. I only saw it once and never saw it in the listings in the newspaper.

In the September 5, 1926 edition olf the Youngstown Vindicator is an ad for “Paramount Week” in Youngstown and one of the theatres listed in the ad that would be showing only Paramount movies was the Liberty Theatre in Hubbard, Ohio. Can anyone tell us any thing about this theater, it’s addressw in Hubbard etc.?

Regarding your previous comment about the Outdoor Auto Theatre, it is listed on Cinema Treasures as being located in Youngstown.