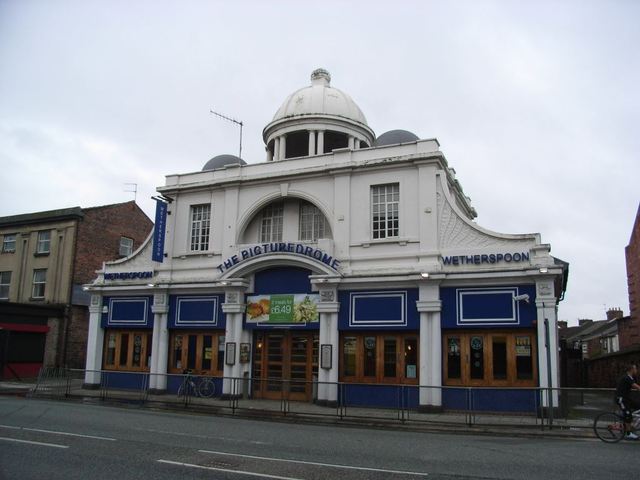 This was built on the site of Lindley’s Kensington Brewery which dated from at least the 1840’s, and closed about 1905. In 1909 at the height of the Roller Skating craze, a rink was proposed to be built on the site, and in September it was stated that "The Old Brewery site being laid out as a Roller Rink. Work not yet complete. Application (for approval of plans) withdrawn." The withdrawing of the application tells us that the scheme had been abandoned, and the skating rink never opened. The craze had quickly come and gone.

Instead, on 11 August 1910 a plan was submitted of a "New Cinematograph Hall". The argument surrounding Liverpool’s first purpose-built cinema has to be raised again. It has been stated that the Bedford Hall opened on Boxing Day, 1908, exactly two years before the Kensington Picturedrome. This is definitely wrong, and I hope to prove that both cinemas opened in December 1910.
Regarding the Bedford Cinema, the Wood family (who were the original owners), Frank Unwin, Derek Whale, and others, have all said that it opened in 1910, but the actual date remained hard to prove, although Derek Whale said it was on Boxing Day. (The Kensington Picturdrome certainly opened on Boxing Day (in 1910), and I believe that this is where the confusion over the opening date of the Bedford originates.)

The Cinematograph Act, which came into force on 1 January 1910, dictated, among other things, that the projection equipment should be in a fireproof room, outside the auditorium. This prompted the building of purpose-built cinemas. Nearly all cinemas before 1910 were conversions of existing buildings.

The plan of the Kensington Picturedrome was submitted on 11 August 1910 and was plan number 29705. The plan of the Bedford was number 29676, and was submitted no earlier than late-July 1910.
The Cinematograph Act of 1910 was also responsible for the introduction of Cinematograph Licenses, and premises wanting to show films could not do so without being issued with a license. The licence for the Kensington Picturedrome was granted on 23rd December 1910, and the cinema opened, by invitation only, on Saturday, the 24th, and to the public on Monday, the 26th. (There was no Sunday opening for cinemas in those days, not that it would have opened on Christmas Day). Unfortunately the opening of the Bedford Cinema was neither advertised, nor reported on, in the local press, but the licence was issued on the 24th December 1910. With Boxing Day being a favourite time of year for places of public amusement to be opened to the public, it seems very likely that the Bedford Cinema did indeed open on that day, but in 1910, certainly not in 1908. If further proof is needed Kelly’s Directory of Liverpool for 1911, published at the end of 1910, states in its entry for Bedford Road: "site for new Picture Theatre".

The arrival of the new cinema was the subject of the following article which appeared in the "Liverpool Daily Post & Mercury" dated Monday, 26 December 1910:
"The Picturedrome, Kensington."
"Kensington folks desiring a couple of hours enjoyment of a really first-class "moving-picture" show need not henceforth depart from their own neighbourhood, for the elegant Picturedrome, which has been erected in Kensington near the junction of that thoroughfare with Holt Road, bids fair to become one of the most popular halls devoted to this class of entertainment in Liverpool and district. Structurally the building leaves nothing to be desired, the architects Messrs. Campbell and Fairhurst, of Southport, having succeeded most admirably in designing a really comfortable hall. The appointments are luxurious, the ventilation perfect, and the scheme of decoration most pleasing. The management proposes to show the best class of pictures only, whilst the prices of admission to the three performances to be given at 3, 7 and 9 o'clock will be the moderate prices which obtain elsewhere. An entire change of pictures will be made twice each week - on Mondays and Thursdays. On Saturday last a large number of people attended the hall at the special invitation of the proprietors, and a capital programme was sustained. In addition to a number of excellent story films, several current events were pictured on the screen, these including scenes at the Hulton Colliery after the terrible explosion, and views of the funeral of the brave London police officers who were shot. Solos and duets were given by Miss Wilmot and Mr W.H. Atkinson. The hall will be opened to the public today."

Films were far from being a novelty in the area as The Sun Hall - almost opposite - had shown occasional films as far back as June 1905. On 22 October 1907 "Cinematograph Entertainments (were) sanctioned for 12 months" by the Licensing Committee. This permission was repeated on 20 October 1908 and again on 19 October 1909. (Note that even though Cinematograph Licenses didn’t exist before 1910, premises showing films still needed official permission to operate, and a music license to cover the piano or orchestra. The fact that the Bedford Cinema doesn’t feature in any of the Licensing Records before 1910 is yet further proof that it didn’t then exist.) On 25 October 1910, the Sun Hall was due to make an application for a Cinematograph licence, but didn’t do so, and as far as can be ascertained films were never again shown there.

In 1918 a new waiting room was built for the Kensington Picturedrome. This was situated at the side of the rear of the building, and was demolished in 1988.
In September 1921 the premises were enlarged by building an extension at the rear with a new stage (and consequently screen) area. The seating capacity was subsequently increased to 1,100, and the architects in charge of the alterations were the Liverpool firm of Gray & Evans.

Mr Dovenor was a director by March 1922.
By 1929 the Kensington Cinema was part of the North Western circuit of cinemas, having dropped the old-fashioned sounding "Picturedrome" part of its name. It remained part of the North Western circuit for the rest of its days.
British Thomson-Houston talkie equipment was installed in April/May 1930 under the supervision of Gray & Evans.

In 1935 the seating capacity was 1,050.
The Kensington Cinema closed on 6 December 1958 with (local boy) Frankie Vaughan in "Wonderful Things" plus "Johnny Bravo".

Television was claimed to be the major cause of closures of cinemas in the late-1950’s, and, as if to rub salt in the wound, workmen moved into the former cinema in January 1959 to convert it into offices and stores for Stuart & Dorfman, a television rental firm! The foyer was then used for Offices and Rentals, and Hire Purchase accounts. The auditorium was partitioned off to form Maintenance Workshops and a store. 30 Males and 15 Females were to be employed, and the building was renamed (shades of the past) Teledrome. Stuart & Dorfman seem to have left the premises in 1970.
The building remained unused until Seldons took it over about 1977 and converted it into an Amusement Arcade and Bingo Hall. While the work was going on the original prices from 1910 (3d, 6d & 1/-) could be seen - carved in stone - over the entrance.
During the summer of 1980, the building had a £100,000 facelift. It was then called Seldon’s Arcadia. A sign reading "The World in Motion" was uncovered above the main arched entrance. This slogan can be seen on an early photograph of the Southport Picturedrome, as well as some other early cinemas, and may well have been a circuit of early cinemas. It is hoped that the sign was left where it was. The area in question was covered over again.

By 1988 a Snooker Club was operating in the building as well as Seldons and that phase lasted until 1995, at least.
About 1997 the cladding which for years had covered the upper part of the facade was removed, revealing once again the first floor windows. The building was then renamed the Kensington Palace.

J.D. Wetherspoon have since converted the building into one of their chain of pubs, named ‘The Picturdrome’, which opened on 25th November 2002.

The facade is one of only about four from the first year of purpose-built cinemas to survive in its original condition. Others being the Picture House in Birmingham, the Duke of Yorks in Brighton, and possibly the Electric Theatre in Portobello Road, London (although it’s been said that that’s been altered at some stage). Unfortunately, nothing remains of the interior of the Kensington Picturedrome’s auditorium.

Thanks for the excellent introduction and photos Phillip.

How do we get rid of the unnecessary advert?