The former Town & Country Cinema was built as a single screen theater with roughly 600 seats, opening November 21, 1969 as an Eastern Federal Corp theater, first-run suburban house in Marietta. It became a two-screen theatre on May 23, 1975 and became a triple in 1981. It was taken over by George Lefont on May 26, 1995 and was renamed Marietta Star Cinema. It was closed in 2000.

Gee, I dunno, shouldn’t that built date be after 1968? Eastern Federal didn’t invade the metro Atlanta area until 1964, as I recall, at Toco Hill. Then, they built a lot of locations fast. They were Meiselman Theatres in those days.

I’ve always thought of the T&C as circa 1970. My first viewing of BLAZING SADDLES was in that original auditorium and the theatre had the ‘70s drapes thing going on. I went there a few times, but don’t recall doing so as a triple. What a horror that must’ve been. Very basic, and non-inviting. I’ve avoided it for decades.

Now the T&C wasn’t that bad… It did big business back in the 70’s as a twin, the split of the newer auditorium was a butcher job, funny since it was the first time I ever saw Eastern Federal spend any real money doing a twinning.

I was there the last week it was operating before it was gutted the first time. The operators at that time didn’t realize that EFC’s ground lease was about to expire. EFC pulled out all the equipment and left it gutted. Lefont took the equipment from the old Plitt Promenade, which was being gutted and turned into a Best Buy, and reopened the T&C as the Marietta Star Cinema. He operated it for a while but it was too far from his base of operations and not really his market. The independent operator of the closed Blackwell Cinema took over from Lefont and ran it until it closed as far as I know.

Went by the other day and it is being completely gutted and I was told the entire area down the “arcade”, along with the storefronts between it and the Big Lots is being redeveloped into a Goodwill store.

There are lots of fond memories among the people of Marietta about the T&C.

When was it gutted the first time? I went to lots of movies there in the nineties when it was a dollar movie theatre, but it was always gross and sort of smelled bad. Broken seats, sticky floors, that sort of thing. I always thought that walking down the arcade to the theatre was the best part of going-well, that, and stopping at Rocco’s for chili after the movie.

After Eastern Federal’s ground lease expired (about 98?)they pulled out every bit of equipment, seats, etc. that they could They even ripped up some of the carpet! Lefont came back in behind them a couple of years later are refitted it and opened it as the Marietta Star Cinema. Eastern Federal opened it, Chappelle Cinemas took over for a short time, then it was a constant cycle of opening and closing, including stints showing Spanish and Indian films. The last operator before it was gutted the first time was Cinestar, who also ran the Salems Gate in Conyers.

I think that the original post by Don might refer to the old Miracle or perhaps some theatre of that time that might have used the name Town and Country. This location was a 1970 era build. It was of the second generation of Eastern Federal Theatres built here, and like the Cobb Cinema and Ben Hill, was cheap to build and operate. The junction of the T&C shopping center had something of a small town square feel and the box office opened out onto it.

Inside it very much resembled the old Sandy Springs Mini Cinema. Small paneled lobby, shallow, wide shaped auditorium with a good sized screen, but NO concession stand. The far wall of the lobby had vending machines for drinks, candy and popcorn. During these years it was not unusual for theatres to have vending machines, but this was the first one I saw with machines only. On busy nights an employee would be stationed nearby to issue change and assist with mechanical problems. In the spring of 1972, the machines were removed and a very small concession stand built in their place.

The booth was manager operated and equipped with a Cinemeccanica V-18 projector and 12,000 foot reels which were mounted behind the projector. Since these reels had a capacity of about 2 hours and 20 minutes, anything longer had to have an intermission. Tora, Tora, Tora in May of 1972, Nicholas and Alexandra in September of 1972, and Sound of Music in its 1973 reissue were the ones that I remember being split. Sleuth, in the spring of 1973 was the longest movie I saw run on one reel.

In those pre VCR days, it was common for theatres to bring back old hits to fill in gaps in their booking schedules. Whenever one of my favorites would reappear in this manner I would try to go see it since you never could be sure when or if you would get the chance again. A July 1971 booking of the double feature Bullitt (or as it was listed on the marquee: Bullet) and Bonnie and Clyde first brought the T&C to my attention. Later that year I started working for EFC and saw many movies here. Being located in Cobb County, T&C (as well as the Miracle, Cobb Cinema, Cobb Center, and Belmont) could play the big first run movies day and date with the first run houses in Atlanta. Since I could now get in free, I made the trip to see Dirty Harry, Cowboys, Last Picture Show, What’s Up Doc, Butterflies Are Free, Sleuth, and Jeremiah Johnson, among others. The screen here was a very nice size in relation to the size of the auditorium and I recall Cowboys and Jeremiah Johnson looking especially fine with their cinemascope aspect ratio.

In 1973 I fell from grace with Ira and the EFC crowd, so I do not know much about the history of this place following those years. This was a time of big business for this place and during my EFC days it was fortunate enough to be well managed by Cliff Bryson. I heard later that he moved to NC to manage theatres for EFC there. I understand that when tripled, the original auditorium was left intact, but I never saw it. I heard that during the construction for the twin addition, a storm blew down the concrete block wall and they had to start over. The only other thing I remember about this place took place in 1991. In the newspaper ad for T2, the theatre listings at the bottom had a big “Presented in 70MM” collar around the logo for the Marietta Star Cinema. I had never heard of this theatre, but when I looked up the address, I found it to be the old T&C, now run by George Lefont.

The T&C, like countless other places like it, was a product of the particular conditions of movie booking and exhibition that existed from 1965 until about 1980. Looking back from 30 years in the future I can see that they were just cheap, and it turns out, temporary stopgaps between the movie palaces of old and the megaplexes of today. But, to those of us who worked in them, they were a big deal then, and am glad that I had the chance to experience that era of the movie business.

The first film I see at this theater was also the theater’s debut film: Alice’s Restaurant, which was released in August 1969. 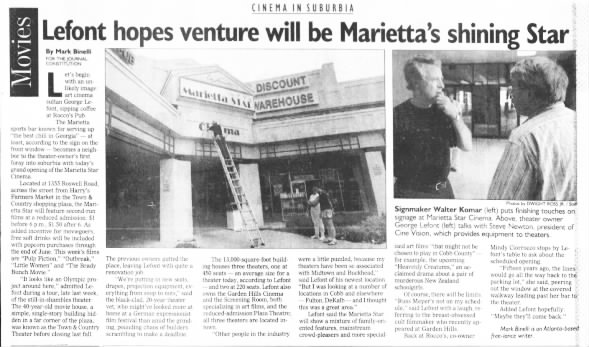 I don’t know if the 2000 close date is correct. I definitely saw Rocky Horror there in 2002, though I’m not sure if they were regularly showing other movies.

I did some research and found listings for Marietta Star Cinema as late as 2004.