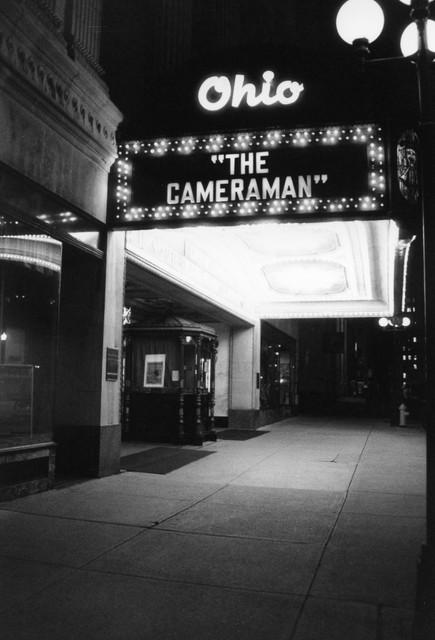 Built by Loew’s Inc. and United Artists Theater Circuit Inc. and located adjacent to the Grand Theatre. The Loew’s and United Artists' Ohio Theatre opened on March 17, 1928 with Greta Garbo in “Divine Woman” plus a stage show featuring John Murray Anderson’s production of “Milady’s Fans” and six acts of vaudeville. Designed by noted architect Thomas W. Lamb, it had a seating capacity for 3,079. It was equipped with a Robert Morton 4 manual/20 ranks theatre pipe organ which was opened by organist Henry B. Murtaugh from the Capitol Theatre, New York. The first ‘talkie’ was in April 1929 with John Barrymore in “The Tempest”. The Loew’s Ohio Theatre presented stage shows as well as movies until 1934 when stage shows ceased and it went over to full time movie theatre. Occasional stage shows were programmed for ‘one night only’ and on March 3, 1938 a young Judy Garland made an appearance. The Robert Morton organ was mainly unused from 1942. On August 1, 1945 the world premiere of “Captain Eddie” starring Fred MacMurray was held at the Ohio Theatre.

In 1966 the American Theatre Organ Society refurbished the organ and regular concerts were begun. The Ohio Theatre was sold and closed on February 24, 1969, the final movie was Michael Caine in “Play Dirty”. A final concert on the organ was held on February 16, 1969 when former house organist Roger Garrett played to a full house.

On October 2, 1970 the Ohio Theatre reopened as the home to the Columbus Symphony Orchestra.

A fundraising scheme was headed by Mary Bishop, with the aim of renovating/restoring the building. It was completely restored to its original condition, reopening in 1984.

Thanks for the new photos retroguy.

My great grandfather John Delfino helped paint the theater before it opened.

Keith: Nice to know that your great grandfather helped paint this cinema treasure in Columbus Ohio prior to its opening! What a painting legacy he left us all.

10TV video about the history of the Ohio with lots of photos. View link

SAVING THE OHIO THEATER in 1969. from the Vintage Columbus Facebook Page. Across the nation downtown theaters were closing in the 1960’s. On February 24, 1969 after 40 years as a movie palace, the Loew’s Ohio theater closed and the theater was sold to a local development group called the 55 East State Company with intent to build an office tower. But there were many people who loved the theater and a committee was organized, The Temporary Committee for Continued Use of the Ohio Theater led by the Columbus chapter of the American Theater Organ Society. This group was able to get delays from Loew’s Theaters in stripping the theater and a stay of demolition from the 55 East State owners. . A demonstration of the acoustical qualities of the Ohio Theater through a free concert by the Columbus Symphony Orchestra on March 28, 1969 proved the theater’s potential as a performing arts center and the response from critics and the public was ecstatic. The Temporary Committee attempted to raise $30,000 to keep the building open but despite the concert success, it fell well short of it’s goal. By May 16, 1969, 55 East State Company was no longer willing to wait any longer for a theater savior. Jean Whallon, wife of Evan Whallon( who was conductor of the Columbus Symphony Orchestra) called John W Galbreath, a renown community leader, in a last ditch effort to save the Ohio. Mr Galbreath was able to get another delay and a plan was developed that successful in saving the Ohio Theater under ownership of Columbus Association of Performing Arts(CAPA) One woman of modest means, who has chosen to remain anonymous, gave her life’s savings to pay half the option to secure the Ohio Theater for an extra period of time. Without that donation, which gave CAPA the time to form and create a plan to save the Ohio Theater, the theater would have been demolished. The Ohio Theater was saved, painstakingly restored and has been under CAPA ownership longer than it’s original tour of duty as a movie palace. Based on material presented in a book called The Ohio Theater printed in 1978 and conceived by Clive David.

Ohio Theatre installed a new Orchestra Shell. The new one is lighter, easier to handle and makes the Orchestra sound better. Cost a million dollars.

Interesting interview with Anne Dornin who designed the interior decor for the Ohio and many other theaters as an associate of Thomas Lamb. It’s from the Brooklyn Daily Eagle in 1931.

Saw on a local NJ newscast about riots in Minnesota, and a photo of this theatre was on. Lots of broken glass doors and the old boxoffice has a lot of damage.